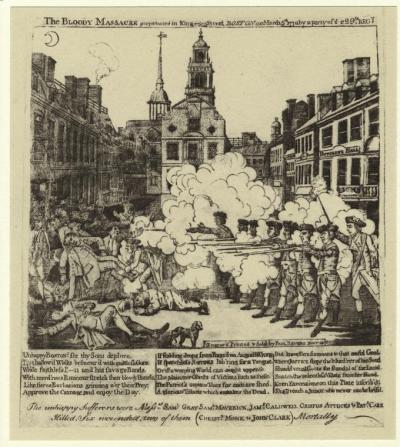 Creating the New Nation: The Revolution

History/American Revolution/Student will identify and explain the sources
of conflict which led to the American Revolution.
Social Studies Skills and Methods/Students compare accuracy and point of view from
nonfiction sources about a particular event.

Students use a Primary Source Photograph Analysis worksheet from the National Archives to investigate Paul Revere’s engraving of the Boston Massacre. Students then assume roles of witnesses and jury members from the trial of Captain Thomas Preston in recreating critical portions of the trial. The jury members then determine their verdict and compare it to the one handed down in Boston in 1770.
Students then write a short paper on the element of bias in the engraving when compared to actual testimony from the trial.
As an extended enrichment activity, students view the CNN/Kent Archives film footage of the Kent State shootings from May 4, 1970. An extra credit assignment for interested students is to create a triple T-chart or Venn diagram comparing the similarities and differences of these two incidents in our history of agents from the government shooting its own citizens.

1. As an anticipatory set have students view the color transparency of Paul Revere’s engraving of the Boston Massacre. Students should complete the Photograph Analysis worksheet.
2. Discuss students interpretations of what they perceive happening in the image.
3. Have students arrange their seats facing the middle of the room for “Face to Face” (an ongoing exercise in civic discourse following basic rules of public discussion). In this edition, all students are given copies of the edited transcript of testimony from the trial of Captain Thomas Preston.
4. Selected students are chosen to read the testimony of various witnesses, including Captain Preston. Teacher may clarify vocabulary where needed.
5. When testimony is completed. Student assume role of jurors in deciding Captain Preston’s verdict. This discussion is “Face to Face” among students. The instructor interjects only when clarification is needed or discussion has gone to far astray.
6. Upon reaching a verdict, students are shown the scene from HBO’s John Adams when the verdict is received in Preston’s case.
7. The subject of bias is reintroduced and briefly discussed. (Students have discussed this at length in Language Arts already this year.) Students are then given the writing assignment in which they have to make the case as to whether or not bias was evident in Paul Revere’s engraving.
8. More “Face to Face” should follow the introduction of the writing prompt to allow students to orally process thoughts that may end up in their written piece. This would be viewed as a prewriting exercise.

1. As an extension, show students the 4 minute YouTube clip from CNN/Kent Archives about the May 4, 1970 shootings at Kent State. Frame the clip beforehand in order that students better understand its relevance.
2. Have student read lyrics and listen to Crosby, Stills, Nash and Young “Ohio”
3. As an extension (extra credit) assignment, have interested student make a Venn diagram or triple T-chart in which they research the Boston Massacre and the Kent State shootings and compare and contrast the two events.