World War I in Poetry 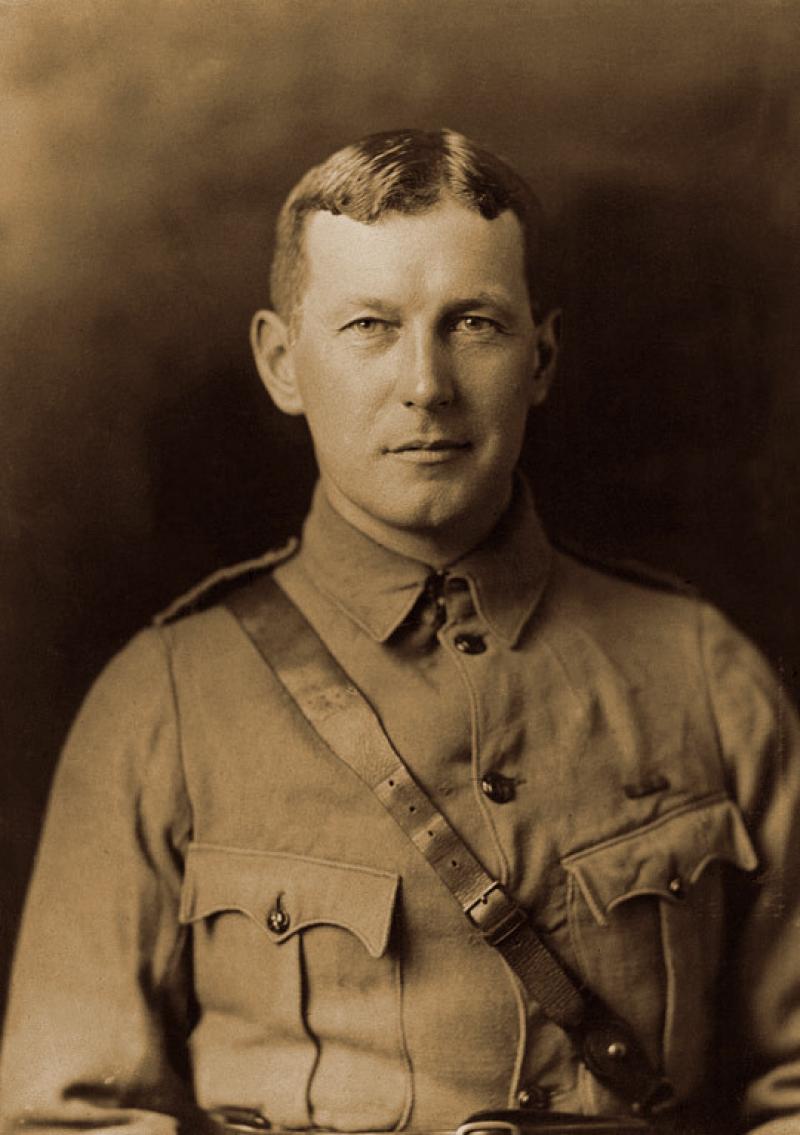 John McCrae “In Flanders Fields”
Rupert Brooke “The Soldier”
Wilfred Owen “Anthem for Doomed Youth” and “Dulce Et Decorum Est”
Edgar Guest “The Things That Make a Soldier Great”
(All the above can be found at the bottom of this page.)

Additional resources for poetry on World War I:

The following sites include poems and information about poets, and can be searched by author, title, etc.
Poets.org: The Academy of American Poets: For Educators
Poetry Foundation - for Educators

By John McCrae
In Flanders fields the poppies blow
Between the crosses, row on row,
That mark our place; and in the sky
The larks, still bravely singing, fly
Scarce heard amid the guns below.
We are the Dead. Short days ago
We lived, felt dawn, saw sunset glow,
Loved and were loved, and now we lie,
In Flanders fields.
Take up our quarrel with the foe:
To you from failing hands we throw
The torch; be yours to hold it high.
If ye break faith with us who die
We shall not sleep, though poppies grow
In Flanders fields.

By Wilfred Owen
What passing-bells for these who die as cattle?
— Only the monstrous anger of the guns.
Only the stuttering rifles' rapid rattle
Can patter out their hasty orisons.
No mockeries now for them; no prayers nor bells;
Nor any voice of mourning save the choirs,—
The shrill, demented choirs of wailing shells;
And bugles calling for them from sad shires.
What candles may be held to speed them all?
Not in the hands of boys, but in their eyes
Shall shine the holy glimmers of goodbyes.
The pallor of girls' brows shall be their pall;
Their flowers the tenderness of patient minds,
And each slow dusk a drawing-down of blinds.

By Rupert Brooke
If I should die, think only this of me:
That there’s some corner of a foreign field
That is for ever England. There shall be
In that rich earth a richer dust concealed;
A dust whom England bore, shaped, made aware,
Gave, once, her flowers to love, her ways to roam;
A body of England’s, breathing English air,
Washed by the rivers, blest by suns of home.
And think, this heart, all evil shed away,
A pulse in the eternal mind, no less
Gives somewhere back the thoughts by England given;
Her sights and sounds; dreams happy as her day;
And laughter, learnt of friends; and gentleness,
In hearts at peace, under an English heaven.

By Wilfred Owen
Bent double, like old beggars under sacks,
Knock-kneed, coughing like hags, we cursed through sludge,
Till on the haunting flares we turned our backs,
And towards our distant rest began to trudge.
Men marched asleep. Many had lost their boots,
But limped on, blood-shod. All went lame; all blind;
Drunk with fatigue; deaf even to the hoots
Of gas-shells dropping softly behind.
Gas! GAS! Quick, boys!—An ecstasy of fumbling
Fitting the clumsy helmets just in time,
But someone still was yelling out and stumbling
And flound’ring like a man in fire or lime.—
Dim through the misty panes and thick green light,
As under a green sea, I saw him drowning.
In all my dreams before my helpless sight,
He plunges at me, guttering, choking, drowning.
If in some smothering dreams, you too could pace
Behind the wagon that we flung him in,
And watch the white eyes writhing in his face,
His hanging face, like a devil’s sick of sin;
If you could hear, at every jolt, the blood
Come gargling from the froth-corrupted lungs,
Obscene as cancer, bitter as the cud
Of vile, incurable sores on innocent tongues,—
My friend, you would not tell with such high zest
To children ardent for some desperate glory,
The old Lie: Dulce et decorum est
Pro patria mori.

The Things That Make a Soldier Great

By Edgar A. Guest
The things that make a soldier great and send him out to die,
To face the flaming cannon's mouth, nor ever question why,
Are lilacs by a little porch, the row of tulips red,
The peonies and pansies, too, the old petunia bed,
The grass plot where his children play, the roses on the wall:
'Tis these that make a soldier great. He's fighting for them all.
'Tis not the pomp and pride of kings that make a soldier brave,
'Tis not allegiance to the flag that over him may wave;
For soldiers never fight so well on land or on the foam
As when behind the cause they see the little place called home.
Endanger but that humble street whereon his children run—
You make a soldier of the man who never bore a gun.
What is it through the battle smoke the valiant soldier sees?
The little garden far away, the budding apple trees,
The little patch of ground back there, the children at their play,
Perhaps a tiny mound behind the simple church of gray.
The golden thread of courage isn't linked to castle dome
But to the spot, where'er it be—the humble spot called home.
And now the lilacs bud again and all is lovely there,
And homesick soldiers far away know spring is in the air;
The tulips come to bloom again, the grass once more is green,
And every man can see the spot where all his joys have been.
He sees his children smile at him, he hears the bugle call,
And only death can stop him now—he's fighting for them all.