Perhaps as much as any machine in American history, the cotton gin shaped the nation’s economic, social, and political development. Although many people associate the cotton gin with only the American South, students can not ignore its importance to the nation’s other regions. Eli Whitney’s creation sparked not only an explosion in Southern cotton production but also fostered the associated expansion of racial slavery throughout the region. To understand the importance of this invention, we need to examine three different aspects of its creation and impact: the invention and patenting process, its economic importance, and its social ramifications.

1) To introduce students to the processes of creating and protecting intellectual property.
2) To demonstrate how the cotton gin, and expanding cotton production, fostered regional interdependence and Northern industrial growth during the antebellum period.
3) To highlight the fact that inventions often have unintended consequences, using the cotton gin and the expansion of racial slavery as an example.

Eli Whitney was one of the most significant early American inventors, pioneering mass production techniques as well as the cotton gin. A Yale College graduate who was working in Georgia as a private tutor to pay off his educational expenses, Whitney saw a need for a machine that would ease the process of removing seeds from blossoms of short-staple cotton, the only type that could be grown inland. Patented in 1794, the cotton gin made it possible to farm cotton profitably far from coastal areas. The profits did not, however, trickle down to Whitney himself; instead, because of a proliferation of imitations, the U.S Patent Office refused to grant Whitney a patent renewal in 1807.
The National Archives and Records Administration has created an entire website devoted to Whitney’s experiences with the Patent Office. The site offers carefully created and imaginative writing exercises, debate topics, and document analysis.

Another way to approach the importance of this invention is to examine the economic importance of the cotton gin to the entire nation, indeed the world, not just to the American South. One way to do this is to use comparative shockwave maps prepared by the University of Oregon. Teachers will first want to explain the differences between short-staple and long-staple cotton and how the technology of the cotton gin made large short-staple cotton plantations feasible. To demonstrate the spread of cotton as a staple crop after the 1790s, teachers could use this map that shows the spread of cotton across the country in ten year increments. 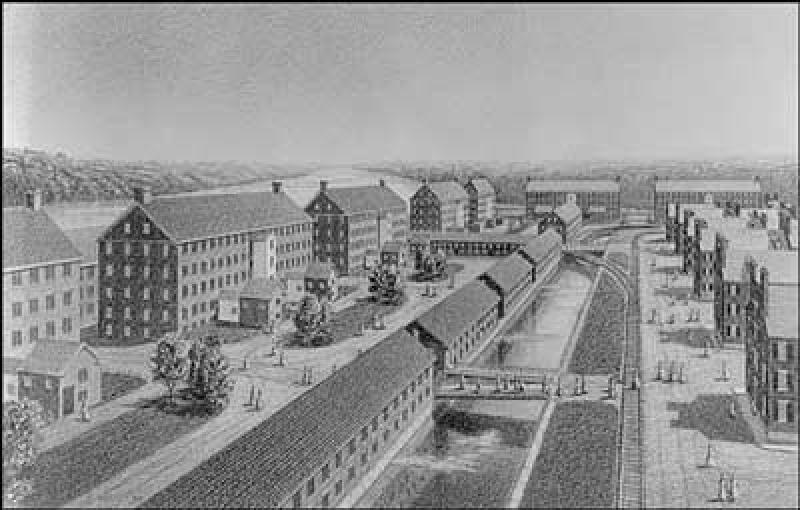 The expansion of cotton throughout the South would not have happened without the concurrent development of industrial plants able to process the cotton and the emergence of widespread consumer demand. In fact, one could argue that the industrial development of the North was inextricably linked to the agricultural commitment of the South. One of the most important American textile centers was Lowell, Massachusetts, a town that depended upon cotton production equally as much as did Memphis, Tennessee. This web site on the Boott Cotton Mills of Lowell will allow students to see how the cotton gin affected economies outside of the rural South. Complete with primary documents and historic drawings and photographs, maps, and a lesson plan with several suggested activities, this site allows students to witness how the cotton gin had direct effects on Northern industrial life.
Many of the workers in the early textile mills were women from the New England countryside. This site provides Harriet Robinson’s brief, first-person account of her life as a "mill girl" at Lowell. Another web site with information about Harriet Robinson is here. Another, related site, offers additional documents that provide insight into the lives of these American women employed because of the cotton gin. Reading information on this web site would allow teachers to launch class discussions about much broader issues, including the ways new technologies create new job opportunities, the ways technologies have changed our working and personal lives, and, again, about the unintended consequences of technological innovations.

However much the cotton gin changed the lives of New England textile workers, the effects on African-American slaves were much more dramatic and serious. Simply put, the invention of the cotton gin, with its promise of greater profits from cotton cultivation, virtually insured the extension of racial slavery into the rich farmlands of the American west. These three maps jointly illustrate the connections. One shows the expansion of cotton production in the American South between 1790 and 1860, another shows the expansion of racial slavery during the same period, and the third shows the economics of cotton in the Antebellum South.
One way to examine the importance of the cotton gin is to read about the lives of slaves on cotton plantations. Here are two, short, first-person accounts of life on as a slave on a cotton Plantation. In the first one, Charles Ball describes life on tobacco and cotton farms in Maryland, South Carolina, and Georgia. The second description, provided by Solomon Northrup, includes descriptions of the cotton gin’s importance to individual plantations and descriptions of the difficulty of working in the cotton fields. The narrative of Solomon Northrup was used in the making of the movie, "Twelve Years a Slave."
You might have your students explore the extent the cotton gin changed the method of production on plantations.  After reading these two accounts, discuss if this was a different way of production or an extension and intensification of a traditional, perhaps pre-modern system.  You can also discuss how the cotton gin led to the reliance on cotton, which had important social, economic, political, and environmental effects.