To the American Soldier the Middle of the Road is Closed 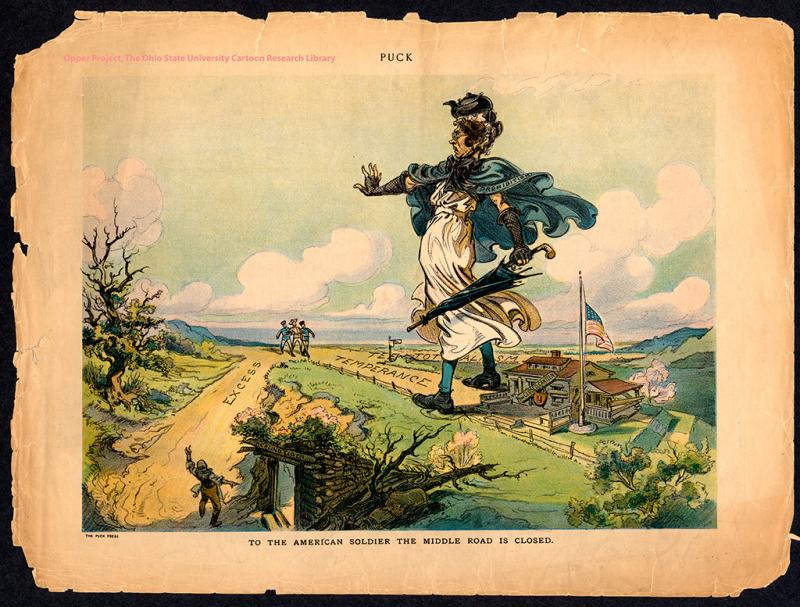 The National Prohibition Amendment was ratified by the United States in 1919 and took effect at midnight 16 January 1920 (one year to the day after achieving ratification). It was repealed by amendment in 1933. The amendment banned the "sale, manufacture, and transportation" of alcoholic beverages. The move was supported by people who were against liquor for a variety of reasons: members of the Women's Christian Temperance Union (which is represented here by the woman standing in the road) thought drunkenness was immoral and resulted in harm to women and families, business owners felt that alcohol contributed to absent or ineffective workers, and others simply felt that the country was better of without alcohol. Opponents of Prohibition accused the "dries" of being fanatical in their crusade against liquor, and many felt that a middle ground could be established if the dries were not so overzealous. One of the major points that anti-Prohibition interests made was that American soldiers were returning from Europe as victorious veterans, and even though they had fought against the forces of totalitarianism, making "the world safe for democracy," their free will was being curtailed by anti-liquor interests in America. A man in the lower corner beckons to an underground saloon, also called a speakeasy, which sprang up around the country as illegal bars that continued to serve alcoholic drinks throughout Prohibition.