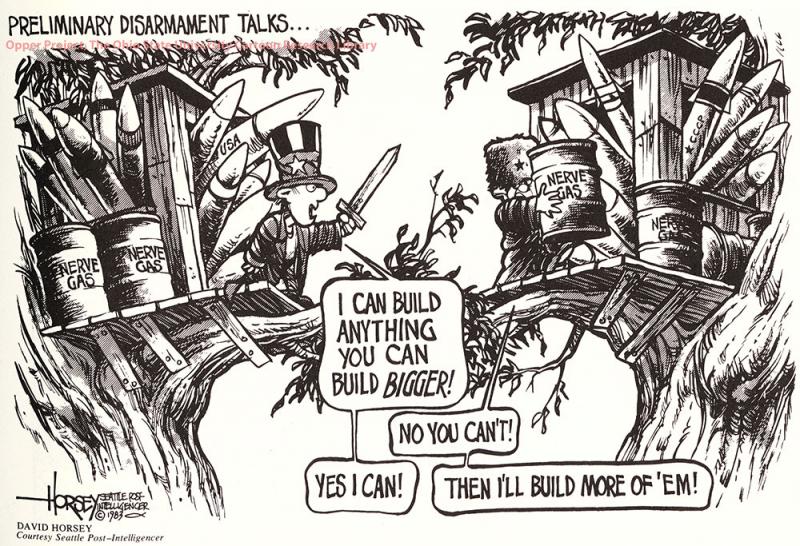 Reprinted in Best Editorial Cartoons of the Year 1984

The conflict between the United States and the Soviet Union (CCCP are its initials in the Russian language) in the last half of the twentieth century is called “the Cold War” because it never escalated into full-fledged battle, the United States vs. Russia, democracy vs. communism. The Cold War was characterized by competition between the two nations, however. This included competition for allies among other nations (leading sometimes to war, most notably in Vietnam), and for more and different weapons. Americans felt that communism was antithetical to the American system, and characterized the Soviet government as bent on dominating the world. By 1985, however, Americans had grown accustomed to the idea, which called for a cooling off of the arms race. In the 1970s, the process of “détente,” or the relaxing of tensions, led the US and Soviet governments to agree to treaties that put limits on arms production, for example the Strategic Arms Limitation Treaties, or SALT I and II. Ronald Reagan, president from 1981 to 1989, and his advisors continued in this effort, but combined it with a major arms build up, which included nuclear weapons and other weapons of mass destruction, such as chemical warfare through the use of nerve gas. The dialogue in the cartoon refers to a song by Irving Berlin from the popular 1946 musical Annie Get Your Gun depicting an increasingly difficult competition between sharpshooters Annie Oakley and Frank Butler.