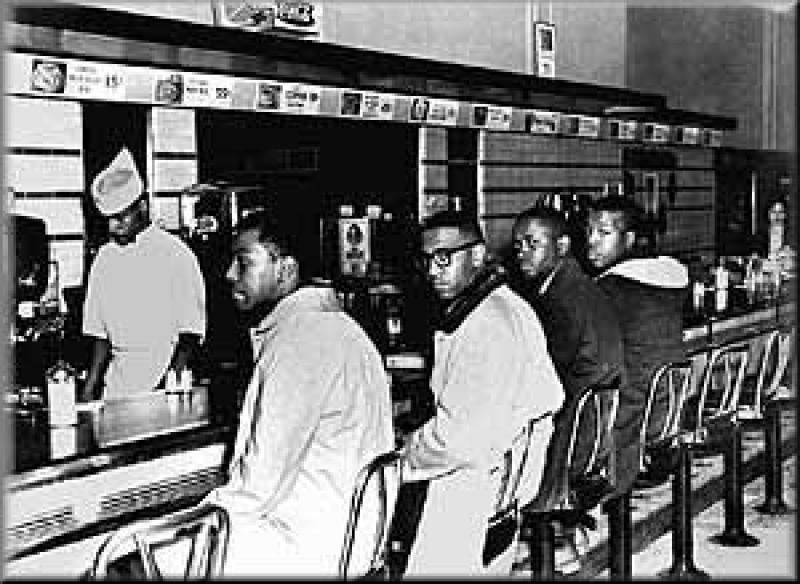 This lesson introduces students to the Student Non-Violent Coordinating Committee (SNCC), one of the "big 5" civil rights organizations (the other four were: the Urban League, NAACP, SCLC, and CORE).  The SNCC is credited with having led the student portion of the civil rights movement and with helping initiate the movement's transition to the Black Power phase of the late 1960s.

1. To understand the motivation of African-American students in organizing the sit-in in Greensboro and the formation of the SNCC.
2. To understand how the generational differences between members of SNCC and other civil rights groups led to a difference in emphasis in the organizations.
3. To understand the ideological transition to Black Power in the late 1960s.

Introduce students to the sit-in at the Greensboro lunch counter in 1960, the catalyzing event for the formation of SNCC.

History.com provides an overview of the encounter in Greensboro. There are transcripts of speeches by James Farmer (former head of CORE) on the Vanderbilt Library web site, as well as a transcript of Ezell Blair about his participation in the site-in. Americanhistory.com has images from the event. More information is available at snccdigital.org.

To enable student to understand the how generational differences led to ideological differences, introduce them to the key members from SNCC and to the issues the organization came to emphasize.

You might have students form groups or work individually on these questions.  For example, divide them into groups and choose one major organization or leader for each group and have them analyze the groups actvities and goals.

What were the ideological differences between younger and older participants in the movement?
How different were the tactics each group used?

What themes emerge from the oral history interviews?
Have students listen to the songs and analyze them.  How do they connect with religious songs?  Why did civil rights participants use this connection?  How did it help them?

To understand the transition to Black Power have students read the following texts:

SNCC and Black Power.  Provides a brief overview of the organizations ideological transition.

How did Black Power differ from the message given by Martin Luther King?
What was the reaction by whites to the ideas of Black Power?
Was Black Power a legitimate response to racial violence?