The Trial of Galileo 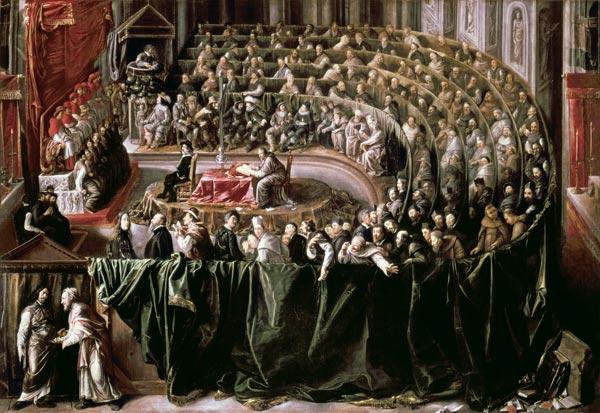 Students will become familiar with the Trial of Galileo Galilei. Students will understand who Galileo was, and how the controversy around his ideas about the solar system reflected the conflict of ideas in a time of change. Students will examine how other scientists shared views like Galileo’s but avoided some of the controversy. Extension activities include developing a Mock Trial based on the Galileo case.

1 History Benchmark A S01A. History. Explain connections between the ideas of the Enlightenment and changes in the relationships between citizens and their governments. (09-10)
1. Explain how Enlightenment ideas produced enduring effects on political, economic and cultural institutions, including challenges to religious authority, monarchy and absolutism. (09)

Students will apply knowledge of persuasive techniques, primary sources, and historical background study of the time period to defend or convict Galileo at the Inquisition.  Students will become familiar with the Trial of Galileo Galilei and will achieve mastery understanding of who Galileo was, and how his life and trial impacted the Enlightenment.

Students read the following documents (found above): Galileo Galilei, “Letter to the Grand Duchess Christina of Tuscany, 1615.” And Documents from Galileo’s Trial, especially the “Indictment” and “Abjuration.”
Together, teacher and students discuss the "Indictment" and fill out the Document Analysis Worksheet: Galileo Indictment.
Students read the other documents on their own and fill out a a Document Analysis Worksheet: Religion and Science for each.
(The class may be divided into groups to look at more documents, such as Galileo’s Defense, and his various Depositions, above.)

Class discussion:
Why was the church upset with Galileo?
Was Galileo right and the church wrong?
The name “Scientific Revolution” implies this era was one of change. What are the old and new values that are coming into conflict, based on these sources? (think about issues such authority, sources of knowledge, and the individual in society, for example).
Is a conflict such as this possible today? Why and how?
Will this information help us in the future and help us understand the modern world? How?

Students will now look at how other scientists addressed the issue of science and religion. The theme that these documents should make clear to students is that scientists of this era did not attempt to destroy the power of the Catholic Church. The Primary sources should give students insight into how European thinkers were interested in scientific truth, which they did not see as contradictory to religious belief.
Divide the class into groups to examine these documents:
Osiander’s Foreword to Copernicus’ On the Revolution of the Heavenly Spheres
Letter of Nicholas Schönberg in introduction to Copernicus
Johannes Kepler, from Astronomia Nova. Heidelberg, 1609
Francis Bacon, Epistle Dedicatory to James I
Each group should complete a Document Analysis Worksheet: Religion & Science

Groups report on their document and what they discovered in it.
As a class, discuss the following questions:
Why did Galileo face the Inquisition and why was he forced to recant but Copernicus, Kepler, and Bacon were not?
What other arguments could have helped Galileo?
What ideas about the relationship between religion and science are revealed by these different scientists?
Consider again the idea of change: What are the old and new values that are coming into conflict, based on these sources? (think about issues such authority, sources of knowledge, and the individual in society, for example).

Administer the folloiwng short-answer exam to the students: Trial of Galileo Test

Mock Trial. Students will defend or prosecute Galileo according to the historical facts and ideas they discovered though analyzing primary and secondary sources.
Students will work in a team of four students and they must divide up the work.
Both prosecution and defense will start with the “Indictment” and find evidence to support it or defend against it by looking at the “Sources Related to Galileo” listed above. Students will use a Who, What, Where, When, & Why worksheet to organize their notes.
Students will have one class period to read through the information and put together a defense or prosecution of Galileo.
Groups will create a handout for the class to take notes on.
History and Language Arts teachers will be the judges and also the principal if available. They will also use a Presentation Rubric to score the groups.
Write an Introduction for Galileo. Write an introduction to Galileo’s Starry Messenger or Dialogues that would serve as an “apology” to allow his book to be better received by the church authorities.
Include an author (think about the kind of person in society who you  would have write it--a cleric, a nobleman, another scientist?) and an explanation of Galileo’s theories that the church may have approved of.
Consider whether or not Galileo would have approved of this introduction (he would not necessarily have to approve- Copernicus didn’t necessarily approve of all his introductions).
Especially for AP students, this activity would be good for demonstrating point of view/ bias in preparation for DBQ essays.
Debrief students after their Introductions are written with a class discussion about whether or not they think their letter would have prevented Galileo’s conviction and what, if anything, could have changed the outcome for Galileo.
Poster Project. Have students create a mini poster comparing and contrasting the trial of Galileo with another famous trial of their choice.
Find a trial at the Famous Trials website.
Each Poster should answer the following questions:
Who were the major characters involved in the trial?  When, where, and why?  What was the given sentence?  What was the impact of the trial on the time period (in Galileo’s case, the period of the Scientific Revolution)?
Give the students one week to complete their mini poster.  Upon return of the students’ work, students will share their mini posters.

Information on Galileo and his times: The Galileo Project
Timelines
History of the Inquisition
Information and Sources on the Trial of Galileo
Nova: Galileo's Battle for the Heavens
Monty Python Spanish Inquisition - YouTube
This lesson was created from lessons by Jamel Ammons, Angela Stukey, and Gina Daniels as edited by HTI.