World War I from the German Side: Recruitment Posters & the Letters of Paul Hubb 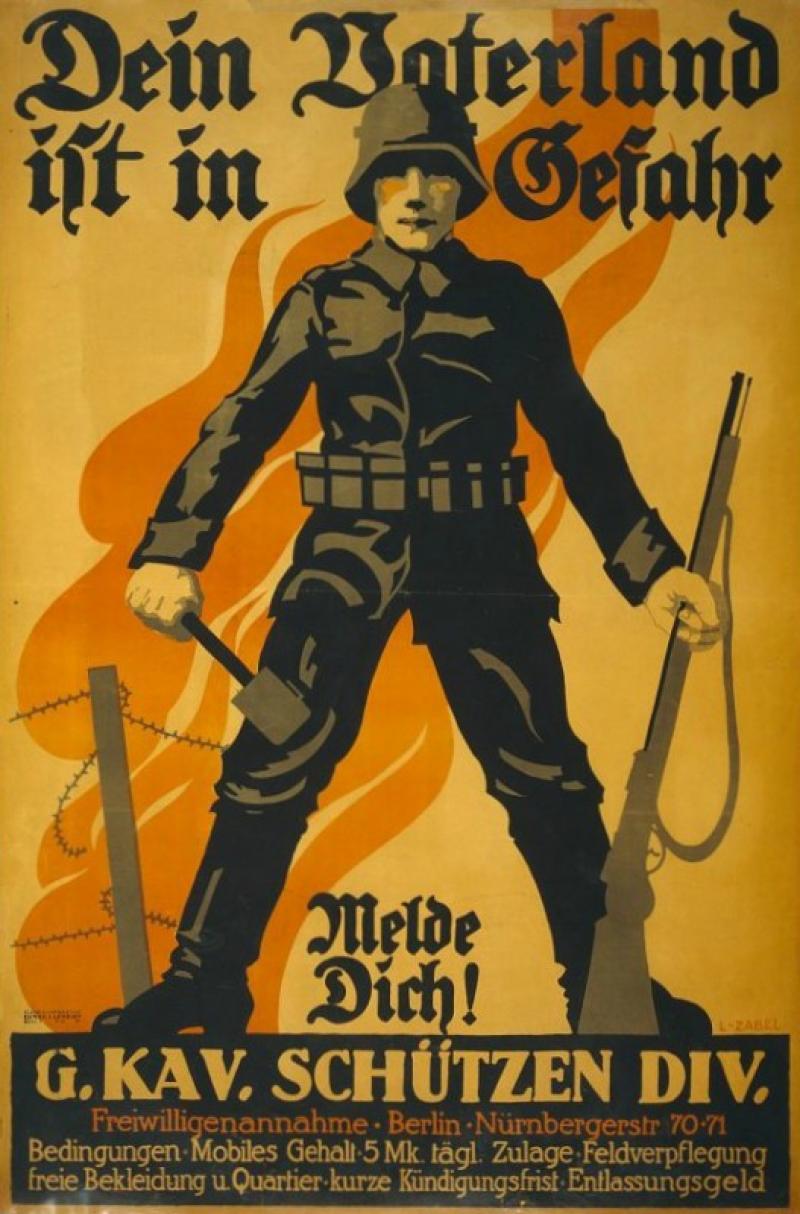 History
Benchmark - b. Connect developments related to WW I with the onset of WW II.
C. Role of new technologies and practices
Indicator - 7 Analyze the causes and effects of WW I with emphasis on: The global scope, outcome, and human costs of the war.

Show how men were recruited for the army, their thoughts, and then battles they fought. Follow one person, Paul Hub, through the letters he wrote found in the book Intimate Voices by Sevetlana Palmer and Sarah Wallis
WW I will have been discussed with the students before we begin this lesson such as the causes, new weapons being used, the alliances among the countries and how nationalism played a great part in young men volunteering for the various services.
Students will analyze German recruitment posters. They will follow Paul Hubb’s war experience through his letters to Maria and his family. They will study the reality and human side of war, as Paul takes them through his training, battles and time spent in the hospital recovering from his wounds.
Students will view Maps of the Battles Paul was in and discuss the strategies used by the Germans and the outcome of the battles. Who won and were their methods the best or did they just have better luck then the opposing army.
Students should be able to see the entire picture and view how war effects countries and people. What this global war cost each country especially Germany and its citizens.

Students will be dived into small groups, and each group will be given a different German recruitment poster. The groups will use a Poster Analysis Worksheet to analyze their poster.
The class will come together and the teacher will lead a discussion of the appeal of these posters to young men. How does this raise the nationalistic pride in ones’ country? Why would young men like Paul Hub volunteer to fight? Why would they want to go to war knowing they could be injured or killed.
The teacher will introduce Paul Hub and his fiancée, Maria Thumm by a picture found in Intimate Voices. The teacher will explain who they are. As the battles of the war are presented over the next few days, students will read some of Paul Hubb’s letters in Intimate Voices, and use the Document Analysis Worksheet to interpret the letters.
Key questions to talk about in group discussion:
1. Paul Hubb’s feelings about enlisting
2. His view of the war at the beginning
3. How his view of the war changes as the war drags on
4. His feelings about the battles in which he has fought

Student will create a German recruitment poster, it will be graded on creativity - 10 pts and appeal to nationalism - 10 pts.
Three letters to home will be written by the students, each worth 20 pts.
The first letter will deal with volunteering for the service.
Second letter: preparing for battle and conditions
Third letter: after several battles have been fought how they feel about the war and the conditions they must live in
These will be graded on creativity - 5 pts. And accuracy of the battle and conditions - 15 pts. Students will have been given enough information to know what battles to talk about and the conditions the soldiers had to deal with in the trenches.

folder for papers given by teacher and notebook paper for letters to be written. The above materials will be given to the students by the teacher.