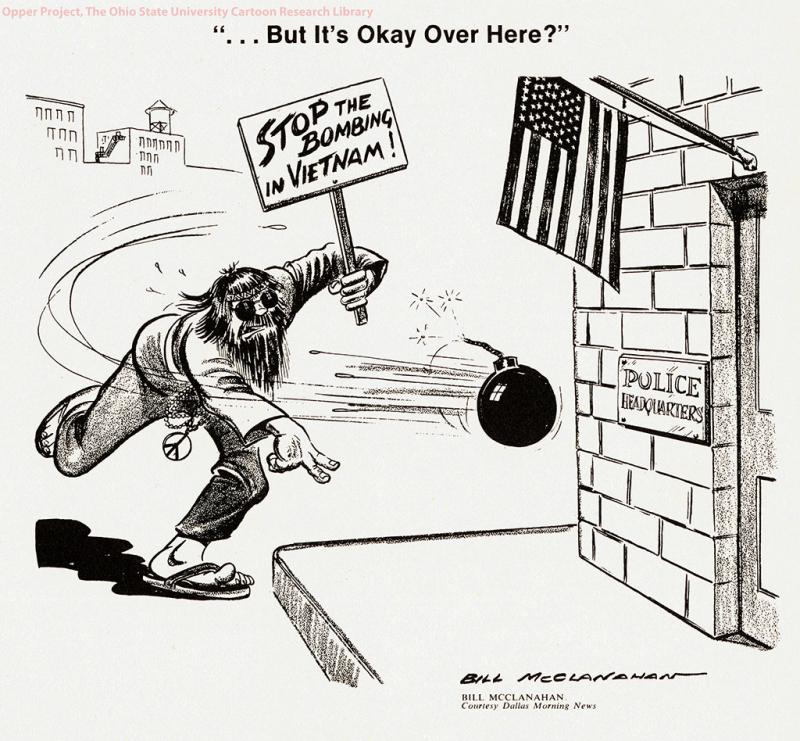 Reprinted in Best Editorial Cartoons of the Year 1972.

United States involvement in the Vietnam Conflict (1964 - 1973) was one of the most controversial events in American history. Many people disagreed with the motives and rationale for the war, and with the institution of the draft, people resented the heavy death toll the war had on young men sent to combat. Additionally, by 1968, the war appeared to have stagnated into a quagmire and victory was not guaranteed. Those who opposed the war engaged in various activities, some of which were non-violent, like protests, marches, demonstrations, etc. Yet, there emerged in the early 1970s a group of protesters who were decidedly more violent and aggressive in their protest tactics. In one incident, protesters apparently detonated a bomb at the University of Wisconsin in 1970, leading to one death and several injuries. This cartoon illustrates the alleged hypocrisy of this violent tactic suggesting that those who are anti-war are ostensibly opposed to violence and bombing, yet they resort to that tactic on behalf of their cause. The man holding the sign and throwing the bomb is a caricature of a hippie or an anti-establishment type who would have opposed the war.