From Scientific Revolution to Enlightenment 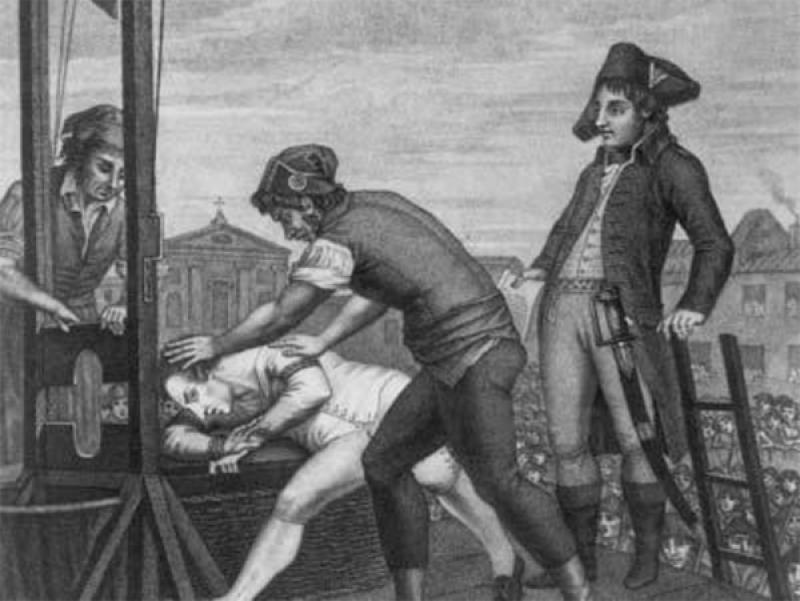 Students will come away from this lesson with the ability to recognize important names of the enlightenment and will understand the basic idea that the order of society was changed from a system of government in which people served the government to a system that envisioned the government serving the people that formed it.

Primary documents to be used:

John Locke: from Two Treatises of Government, 1690  (from Internet History Source Book at Fordham Unviversity)
Jean Jacques Rousseau: from The Social Contract, 1762 ( Reading About the World, Vol. 2, Washington State University)
Drawing:  Robespierre Being led to the Guillotine from How the Enlightenment Worked

Classroom day 1
To motivate the students prior to reading and examining the excerpts of the readings, divide the class into 4 or 5 small groups.  As groups they will be presented the picture of Robespierre Being Led to  the Guillotine (without identifying it). (Ask thme to answer the questions on the handout. As students are talking about what words the image brings to mind, you might want to suggest words like freedom, persecution, law, death, government, authority, liberty, rights, etc.
After opening the discussion up to the entire class and writing the words groups have formed, led the class into a discussion about liberty, freedom, law and order, social standards, authority.  Once this has been defined and posed, students will be asked to think about three forms of government.  One in which there is no law, in which  total anarchy “rules”; another in which the citizens of the country introduce law through a general agreement; and last a system in which one person makes law and controls the people, both the good and bad people.
Relate the last system to absolute monarchy as a way set up the political context of the Enlightenment.
Classroom day 2
The readings for the day will be handed out to the students, along with a
File
document_analysis_worksheet.pdf21.39 KB
.  after the students have worked through their documents in groups, there will be a general discussion focused on selected sentences that focus on the ideas of the enlightenment. Especially note  the idea of people as sovereign and possessing liberty at birth and throughout their life due to the social contract entered into by those who follow the law.
Direct the  conversation as onto the subjects like freedom is a given right, slavery is immoral, government is formed to serve the people, etc.  At the end, allow  time for the entire class to discuss what they have learned and important names and central tenets of thought provided through those thinkers of the enlightenment.

Each student will be asked to create a 5 question quiz over the information discussed the previous two days.  Questions are to focus on important figures of the enlightenment and central ideas spread during the enlightenment.  After collecting these quizzes pass them out indiscriminately to the students to take their classmates quiz.  After allowing them to take the quiz, call on a random student to read his or her question aloud and provide the answer he or she came up with.  This will open up debate for the class to consider whether that student is accurate in his or her response.

Will come later in an announced quiz or test.