King George III and George Washington: A Comparison of Power and Leadership

“He is the best and the greatest man the world ever knew…..Neither depressed by disappoints and difficulties, nor elated with a temporary success. He retreats like a General and attacks like a Hero.”
--Thomas Hopkinson 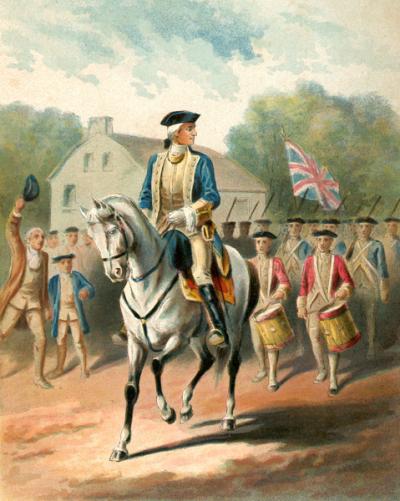 In this lesson, students will compare and contrast historical images of George Washington and King George III and analyze the artists’ perspectives.  Through the class activities, the students will extrapolate key components of each leader’s role as they make inferences related to their image and why the artist may have depicted each leader in the way they did.

Day 1
Whole Group Activity:
1. Provide students with the background information sheet first.
2. Discuss each of the pieces of this sheet to activate prior knowledge for today’s activity.
Small Group Activity: Part I
1. Hand an envelope to each group of students. Contained within each envelope is a picture of King George III and one of George Washington. Each picture has been cut into four quadrants and mixed up between the two pictures.
2. The groups will put the images together like a puzzle. Once the group has completed the puzzle of the two leaders, the students will each need to complete a Primary Source Analysis Sheet about the two leaders.
3. The students will glue the images together.
4. Jigsaw activity: Have students share in pairs their opinions before having them regroup for whole class discussion. Compare and contrast the two pictures of the leaders.
a. Then, hold a class discussion asking the students who these two men are and discuss the findings and questions from the analysis sheet. Discuss the following:
Day 2
Small Group Activity: Part II: T-Chart
1. Next, hang up two pieces of chart paper in the room. On one piece, write George Washington’s name and on the second piece, write King George III. Include an image of each leader on each sheet of paper. (Students will have the images which they just pieced together in their group area.)
2. Down the sides of each piece of chart paper, write the following categories, giving plenty of space in between topics for students to record information. (Some of this information will be obtained through prior knowledge and classroom readings, not just from the image analysis.)
3. The teacher will give only the following information to confirm the student findings from the photo analysis activity.  Students should compare and contrast this information with their observations on the photo analysis worksheet.
a. George Washington, February 22, 1732-December 14, 1799.  He was a commander in chief of the Continental Army and became the president of the United States.
b. King George III, June 4, 1738-January 29, 1820. He was the king of England and the rest of the British Empire, including the American Colonies.

Advertisement
Students will create “want-ads” for these two leaders, incorporating the characteristics or qualities of each within the advertisement.  Here is the
File
advertisement_rubric.pdf256.18 KB
.