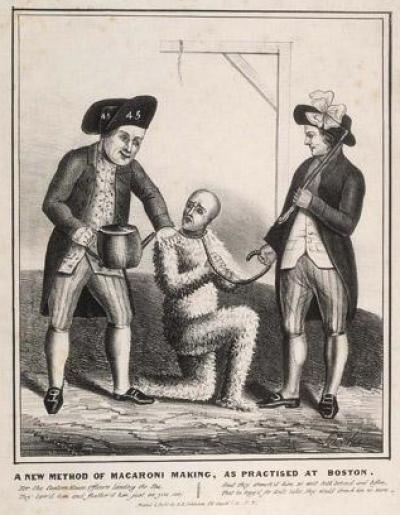 History 6-8  Benchmark E: Explain the causes and consequences of the American Revolution, with emphasis on both Colonial and British perspectives.
Grade 8, GLI 4. Explain the results of important developments of the American Revolution including: a. declaration of American independence; b. character and significance of the military struggle in the North in the early years of the war and the shift of the battle to the South after 1779; c. creation of state constitutions; d. impacts on women, African Americans and American Indians.
The Primary Source(s):
File
tar__feathering_prints_1__2_and_analysis_worksheet.pdf645.84 KB
Source: Library of Congress Prints and Photographs Division Washington, D.C. Collection
Title: British Cartoon Prints Collection.
Date: 1774. Image Numbers:  LC-USZ62-45386 & LC-USZC4-14078
Document:
File
tar__feathering_document_and_analysis_worksheet.pdf1.06 MB
.
Source: Merchants and Traders of Boston. "Address to Governor Hutchinson." 1774.
Ohio Historical Society, PA Box 754, 9. Image Number:  TAH1857.

A summary of the lesson:

Examine poltical activism in Boston in the lead up to the American Revolution  by looking at tarring and feathering using primary sources.
Description of the instructional steps to implement the lesson:
Have Yankee Doodle Song/Instrumental playing as students enter (possible copy of lyrics on desk).
1. Review "I can statements” related to benchmarks.
2. Teacher reviews directions on analysis of documents.  Answers questions/concerns
3. Students work independently to analyze prints and document.
4. Students form pairs to compare and contrast the prints and document using the
File
compare__contrast_chart_for_tar_and_feathering.pdf25.64 KB
.
5. Class comes together to discuss and review their findings. The Instructor should make certain that students identify key comparisons/contrasts concepts

Tarring and Feathering Prints:
Description: These two prints show the Revolutionary practice of tarring and feathering royal officials and others whom the Sons of Liberty felt deserved punishment. The first print shows two men with a tarred and feathered customs officer, they are forcing him to drink from a large teapot. The man has a short piece of rope around his neck which may have been attached to the piece of rope hanging from a gibbet in the background. On January 27, 1774, a British customs officer, John Malcolm, was tarred and feathered, led to a gallows, and forced to drink tea. The American holding the teapot wears a hat with "45" on it, a patriotic symbol referring to the John Wilkes case of 1763. The other American, holds the broken end of the noose and carries a club. The large bow in his hat indicates his membership in the Sons of Liberty.  Date:  1774, Collection Title:  British Cartoon Prints Collection (Library of Congress).  Repository:  Library of Congress Prints and Photographs Division Washington, D.C. 20540 USA  Image  Number:  LC-USZ62-45386
Note on “Making Macarony”:
Yankee Doodle was a song made by a British man named Richard Shuckburg to make fun of the Colonists. Americans loved the song. When the Richard Shuckburg wrote "He stuck a feather in his hat and called it Macaroni" meant that Americans were stupid and thought that a feather was macaroni. Macaroni back then wasn’t the kind that we eat, but it was a hair style in England. Doodle meant "a foolish person." Yankee was a nick-name for New Englanders. The original tune for Yankee Doodle was Lydia Fisher's Jig with these words: "Lucy Locket lost her pocket, Kitty Fisher found it; Nothing in it, nothing on it, But the binding 'round it."  More information regarding song at the Library of Congress.
Key concepts:
Some Americans retaliated in regards to the Acts imposed by England.  Not all Americans wanted to be independent from England, Many merchants/traders wanted to be represented in Parliament and were loyal to the crown. Many merchants/traders addressed Massachusetts Governor Hutchinson asking for peace to be restored and for him to represent them in favorable light to Parliament/King.  Music and visual means (political cartoons/prints/etc) were used to communicate thoughts/feelings/ideas related to events taking place in history.
Terms/Names to discuss:
Sons of Liberty, Merchants/Traders, East India Company Macaroni/Macarony, Custom House Officers, restitution