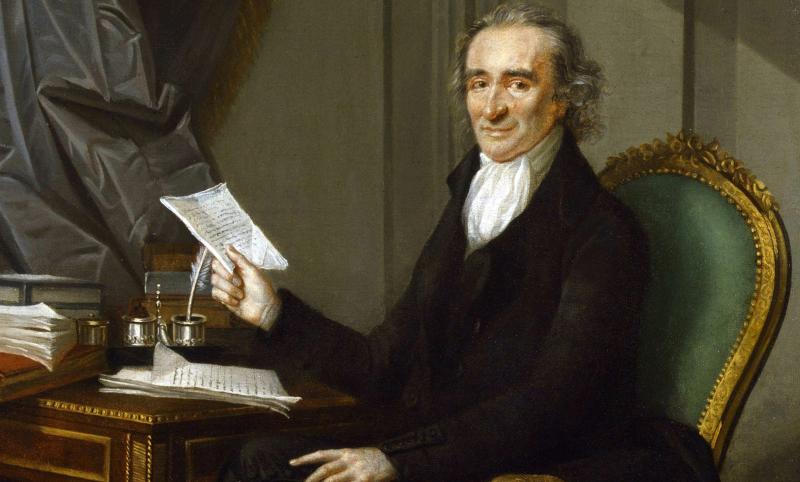 Creating the New Nation: The Revolution

By 1776, England had imposed acts to tighten control of the American Colonies, and armed conflict had occurred in Massachusetts.  The First and Second Continental Congress had met and attempted to resolve issues of tension between the colonies and Britain.  The colonial army had loosely formed, under the leadership of George Washington.
Still, many colonists believed that King George was simply being misled by evil advisers. Many Americans hoped that war and a break with England could be avoided.  The difficult job of the patriots in the colonies was to mobilize public opinion and move it in the opposite direction.
Those wishing for a break with England and total independence had no better propagandist than Thomas Paine.  By reviewing Paine’s life and publications—especially "Common Sense"--during the early portion of the Revolution, students will gain an appreciation for the essential role Paine played in explaining the patriot position and moving public opinion in favor of independence.
Version 1: Students read all of "Common Sense"
Version 2: Students read excerpts from "Common Sense."

1.  In class discuss elements of Paine’s life that make him ideally suited for the job of propagandist as described in the following sources:
The History Guide, Lectures on Modern European Intellectual History, Thomas Paine, 1737-1809
American History From Revolution to Reconstruction and Beyond, A Biography of Thomas Paine (1737-1809)
2. Pass out the "
File
common_sense_analysis_questions.pdf64.76 KB
" worksheet.
3. Allow one class period doing web research reading "Common Sense" and answering the questions on the worksheet.
4. In class discuss student answers to the questions.

The assignment answers are in many cases subjective in nature (except for questions one (persuasive pamphlet) and two (1776) and must be evaluated by the teacher. However, answers will vary greatly and should be interpreted as leniently as possible.  The important thing is to discuss answers in class and give students the chance to defend or explain their answers.

1. Students will begin in two groups.  Each group will brainstorm reasons for or against the total break with Britain.  Groups will then share ideas with opposing group.
File
common_sense_excerpt.pdf12.86 KB
” by Thomas Paine will then be given to each student. Each student will read the text, and complete a
File
common_sense_primary_source_analysis_worksheet.pdf7.63 KB
.
2. Teacher led class discussion will then interpret what Thomas Paine was saying and analyze the scope and point of Paine's plea.
3. Students will then regroup into original groups.  With the background of Paine's ideas, each group will analyze their original reasons for compromise or total break with Britain.

Day 1:
Teacher divides class into two groups; one supporting Britain with the second group advocating complete independence from Britain. Each group produces a list of reasons for their views. All students are given Excerpts from "Common Sense."  Each student will read and interpret Paine's view of what the colonists should do in response to King George's recent actions. Each student will be given the "Common Sense" Primary Source Analysis Worksheet" to guide their reading. Students will also be given the "
File
common_sense_vocabulary.pdf6.33 KB
" sheet.  Definitions will be due for second day of this lesson.
Day 2:
Students will then regather into original groups.  With the ideas presented by “Common Sense”, each group will discuss and evaluate how their original ideas relate to their original perspective views.
Each group will then present to entire class a summary of findings.
Teacher leads class in conclusion of lesson with discussion of the following ideas:
1. Many colonists felt they deserved equal rights from the mother country,  but were not ready or willing to break away from the British Empire.
2. Most sought a way to reconcile “old friends”.
3. The pamphlet “Common Sense” by Thomas Paine, told the colonists that they should throw off connection with Great Britain and create a republic of their own.

The
File
common_sense_post_assessment.pdf6.39 KB
will be distributed and the questions answered by the students.