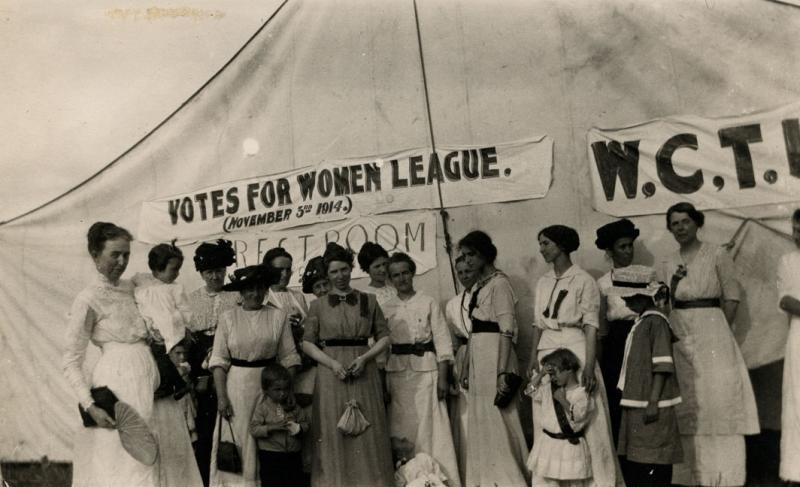 The Votes for Women League organized in 1912 in Grand Forks and Fargo.

This lesson provides access to primary sources for a discussion of woman suffrage, outline point 22.E from the “Guide for AP U.S. History Coverage.” While the issue of woman suffrage did not originate in the Progressive Era, it was during this period that most American women gained access to the ballot.

1.  To introduce students to the motivations, ideology, and organizations involved in woman suffrage.
2.  To teach students to analyze primary documents including cartoons, photographs, and texts.
The following questions surround the issue of woman suffrage and can frame the entire lesson plan. Why did certain men and women favor the extension of the franchise to women while others did not? On what understandings of gender roles and social norms did they base their arguments? What did the franchise symbolize to each side of the issue? How did the opposing camps organize and campaign to express their advocacy?
One useful approach to these questions is to have students compare and contrast written arguments with pictorial ones, asking them to make the connections between literal and symbolic messages. By asking students to scrutinize the primary sources about suffrage, teachers can also expect students to recognize the assumptions about the proper familial and societal roles of women that framed both sides of the arguments. This exercise should illustrate the point that not all women supported the suffrage movement, that most Americans on both sides of the suffrage debate believed that women and men had unique gifts to offer society, and that the suffrage movement had clear class and racial divisions.  Either use the documents in the web site below as part of an in-class discussion, or as a homework assignment.  Alternatively, use the PowerPoint presentation and images provided on your OHTI CD-Rom.
As part of a larger web resource seeking to explain the Progressive Era by focusing on the year and election of 1912, the section 1912: Competing Visions for America on OSU's eHistory provides dozens of documents, cartoons, and photographs for students to analyze.  It is organized into three main threads: anti-suffrage arguments, pro-suffrage arguments, and the political process. While it is very strong in its documentary and image offerings, the site does not contain a lesson plan, sound clips, or video clips. It does include descriptions of the primary sources and suggestions about how students might approach them.