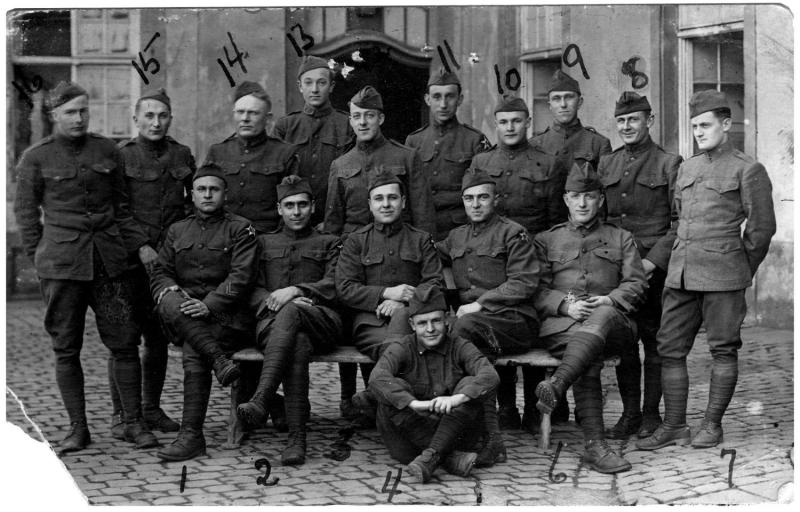 1-2 days, with additional time for students to prepare and submit projects/assignments.

GLI:  10th grade, History, Benchmark D, 20th Century Conflict
6. Trace the development of the United States as a world power with emphasis on:
a. The decision to enter into World War I.

This is a 1-2 day activity designed to further, and reinforce, student understanding of the reasons for U.S. entry into WWI and the contemporary arguments against participation. This is designed to occur after a review of the causes of the war, review/discussion of the manner in which the war is being carried out, by whom and for what reasons. American homefront isolationist sentiment will have already been introduced and discussed.

1. Introduce the topic and learning goal: students will increase their understanding of the arguments in favor of, and against, U.S. participation in World War I.
2. For this assignment, students may be assigned to work in a number of ways: individually, in small groups, or perhaps as part of a jigsaw activity (see jigsaw information and instructions here).
3. Have students will read Woodrow Wilsonʼs April 2, 1917, speech to Congress.
• Remind students that pro-involvement arguments centered around a few ideas: that our economic interests and well-being were being threatened, that our cultural and economic ties with Great Britain were strong, worth defending, and  required us to intervene, and that the institution of democracy was in jeopardy.
• The teacher may choose to excerpt this speech, with particular attention paid to Wilsonʼs attempts to address isolationist arguments; specific references to incidents students will already be familiar with (e.g. Zimmerman telegram); famous/historical statements (e.g.“The world must be made safe for democracy,”).
• Discuss the impact these words would or could have had on Congress, the public, pro-war individuals, anti-war individuals, young men of service age, etc.  Would/could this speech have swayed opinions?
4.  Direct students to read the Vera Brittain, Testament of Youth excerpt (attachment A) and examine the photo of American troops
• With these two items, the idea is to provide students with a contemporary view of how America and itsʼ soldiers were viewed by non-Americans.
• Discuss Brittainʼs use of language with students.  How does she convey her feelings when she sees the Americans?  What does she believe will happen now?  Is that a reasonable assumption?
• Have students look at the photo of American troops.  Hand out National Archives Photo Analysis worksheet for students to complete using the photo.  Can they see what Brittain saw?  Can they put themselves in Brittainʼs place - would they see the Americans as “saviors” too?
5. Next, have students examine the cartoon depicting Lusitania children.
• Have students complete the National Archives Cartoon Analysis worksheet as they work.
• It is critical that the connection be made between “Austria” in the cartoon and Kaiser Wilhelm (Cousin William).
• Questions must include: Why would it matter to Germany if the U.S. had “forgotten” about the Lusitania?  That is, what is the message regarding our “memory” of the Lusitania victims?  Why would the cartoonist have used children to represent the innocent lives lost on the Lusitania?  Would this have swayed opinion?  Why or why not?
6. As the discussion transitions into anti-war positions, students need to shift to thinking about the reasons for non-involvement in the conflict.  It may help to ask questions regarding current anti-war opinions regarding Iraq and Afghanistan - answers may include cost, “itʼs not our fight” rhetoric, debate regarding the true impact of hostilities, etc.
7. Distribute lyrics to the anti-war song “I Didnʼt Raise My Boy to Be a Soldier.  Distribute the National Archives Sound Recording Analysis worksheet (some modifications may need to be made, e.g. references to “broadcaster”), then play the recording for students.
• Discuss student answers and comments on the worksheet.
• What is the predominant feeling of the song?  Is it anger? Sadness? Defiance? How would this song have been received by the general public?
• What is the larger purpose of protest songs?  That is, why would they be a viable form of protest in our culture?  Students will have some familiarity with Vietnam-era protest songs and singers - use that example to promote deeper thinking about the viability and significance of music and song for such a purpose.
8. Next, have students read the text of Eugene V. Debsʼ 1918 anti-war speech in Canton, Ohio.
• As with Wilsonʼs speech, this is a long document and the teacher may choose to use excerpts; this may be presented via handout or computer.
• Students will already be familiar with Debs through previous discussions regarding early labor unions and the 1912 election.
• Debsʼ speech is pro-Socialist and he targets a number of American political issues in addition to the war.  Ask the question “Who was Debsʼ audience?”
• Students should be directed to analyze Debsʼ argument that it is the lower classes that fight the war while upper classes manage war.  Is this a valid argument?
• Would listening to this speech sway your opinion about the war or about joining the military service?  Why or why not?
9. Anti-war poem: Wilfred Owenʼs “Dulce et Decorum Est.”
• Owensʼ 1917 poem is a graphic account of life in the trenches.  Have a student read the poem aloud to the class, then have students discuss the message and the language used to convey the message.  While the title suggests that it is  heroic to die for one country, is that Owensʼ message?  Specifically, how is “Dulce” the antithesis of some images we have of war?  (Possible answers here include the lack of nobility in dying in battle, the lack of glory of fighting for a cause, the fact that war is no adventure, that it is possible to die in horrible, pointless ways.)
• Would reading this poem change the way someone thought about the war?  Could it change someoneʼs mind about enlisting?
• (Optional) Listen to audio of a reading of the poem:

•  After examining and studying the materials presented, students will be required to produce their choice of newspaper editorial, song lyrics, poem, or cartoon.  This product will be designed to sway an audience (to be defined by the student) to support or not support Americaʼs entrance into World War I.
•  Assessment rubric requirements would include: clear presentation from one side of the argument, either pro or con; for written material, at least two valid (i.e. realistic) reasons to support the chosen position; for cartoon, at least one attempt at propaganda-like portrayal of information (e.g. graphic depiction of “the enemy,” or use of particular words or phrasing to elicit emotion).
•  If time permits, or if it is applicable to a particular class, students may be required to present their product, explaining their argument and the method chosen for presenting the position taken.

• None, other than sources and National Archives worksheet links provided.

In additional to innumerable books on the subject, there are numerous websites available to pursue further information regarding World War I.  Two blogs that have proven interesting to students are linked below.  Both blogs are based upon WWI letters from an American and British serviceman, respectively, and serve to provide a “you-are-there” feel to discussions of daily life in and out of the trenches:
• Soldiers' Mail: Letters Home From A Yankee Doughboy 1916-1919
• World War I: Experiences of an English Soldier