The Mob Has Taken Over 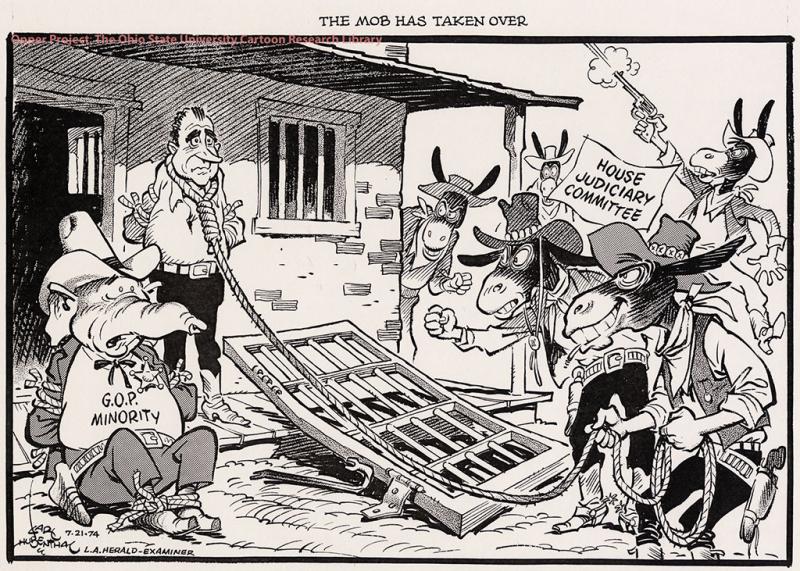 Richard Nixon was elected to the presidency in 1968 as a Republican. In 1972, Nixon ran for reelection. Because of Nixon's characteristic paranoia regarding his political opponents, his staff formed the Committee to Re-Elect the President (CREEP), which carried out various forms of political sabotage to prevent Nixon's defeat. One of the most egregious forms of sabotage occurred in 1972 when people affiliated with Nixon's campaign and CREEP broke into the headquarters of the Democratic National Committee at the Watergate Hotel in Washington D.C. with the intent to tap the phones. They were arrested, and the publicity surrounding this event threatened Nixon's reputation. For two years, Nixon fought media coverage and investigations into his involvement with the break-in and other scandals associated with CREEP. This cartoon depicts the House Judiciary Committee, comprised of a Democratic majority (represented by the donkeys) carrying out frontier-style justice by bringing Nixon to answer for his part. The Republican minority in the House, unable to prevent the full investigation, is represented by the hog-tied elephant in the bottom left corner. In July 1974, the House voted to bring articles of impeachment against Nixon for his involvement in the cover-up of the Watergate affair. Pre-empting their ability to drag him through the impeachment process, Nixon resigned the Presidency on 8 August 1974.