Estimated duration of the lesson: 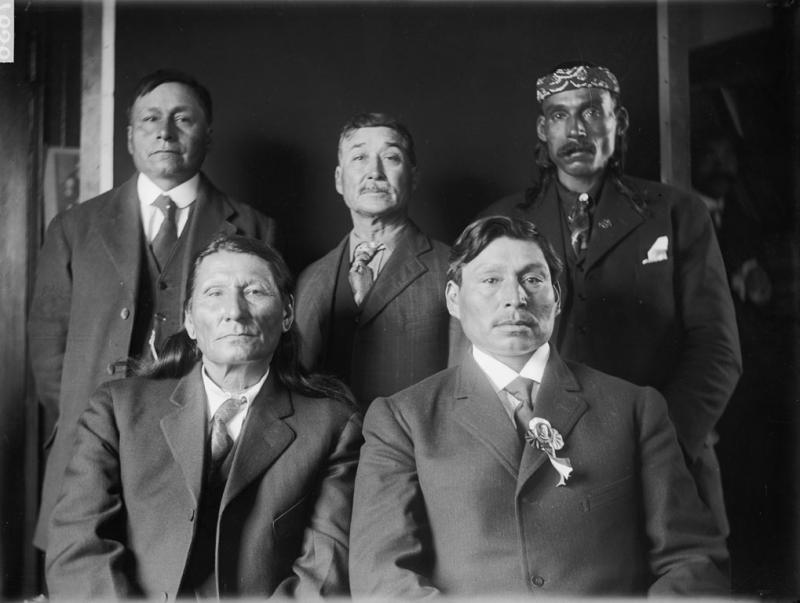 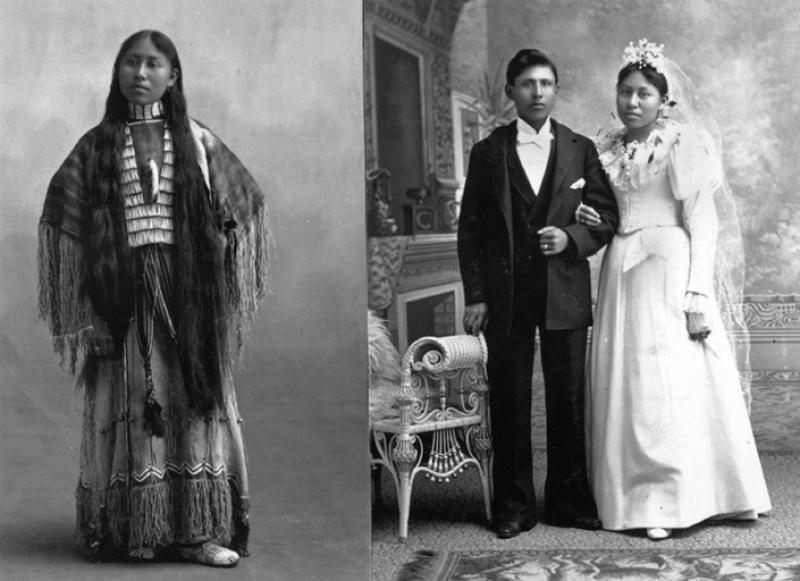 (above) Cheyenne woman named Woxie Haury in ceremonial dress, and, in wedding portrait with husband. Two studio portraits; on left she poses with her hair down, in a beaded & fringed dress, necklace, and beaded moccasins. On right she wears a western-style wedding dress (full length skirt, boned bodice, hair pinned up under a lace veil) and stands beside a young man in white tie. 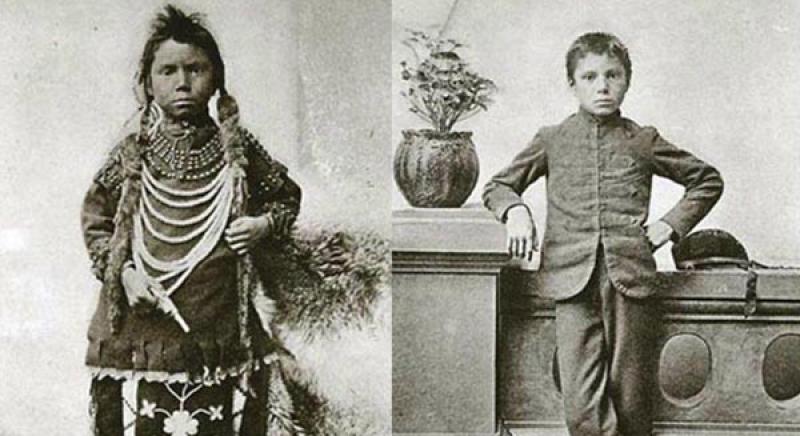 (above) Thomas Moore before and after entrance into the Regina Indian Residential School in Saskatchewan in 1873. (Library and Archives Canada / NL-022474) 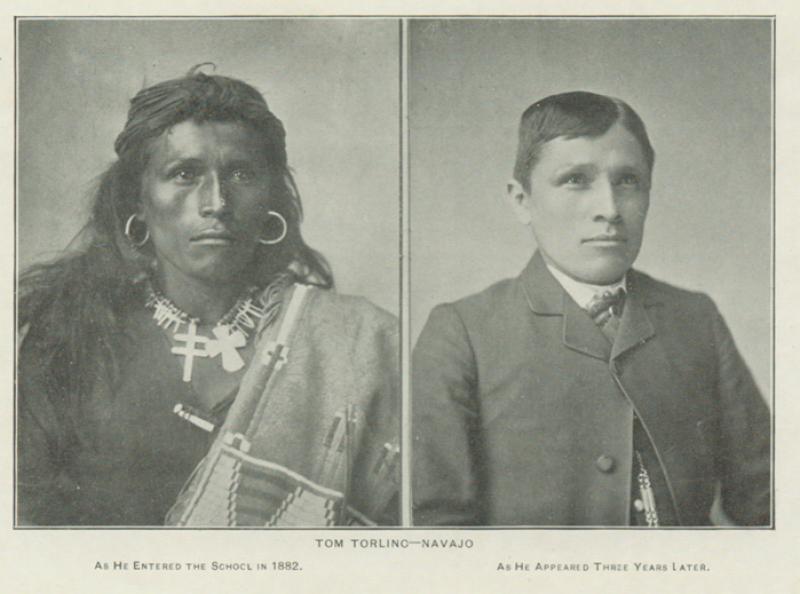 (above) Tom Torlino (Navajo) as he entered school in 1882 (left) and as he appeared three years later (right).
This lesson is really to be used as an introduction to either a general unit on Indian culture or Indian removal. At both the 5th grade level and even 8th grade, knowledge of Indians is usually limited to stereotypes. The Buffalo Bill posters are good examples of how that stereotype was maintained. But I like to start the discussion by showing pictures of Cherokee who are dressed in typical White 19th century clothing. After a discussion of the men in the pictures, what they may have done for a living, etc. I then share with the students that they are in fact Cherokee chiefs. Students are surprised by this and this leads to very valuable discussion of how different the tribes were from each other. This then begins an excellent introduction of how indigenous people adapted to their surroundings and inevitably to European interaction.
Have students write a short narrative on “What I know about Native Americans.” This can be a K-W-L chart or a Quick Write format. Do this a day ahead so that they may not connect this activity to the pictures you are about to show them.
The next day start with the drawing of the Cherokee chiefs. Crop the pictures so that only the pictures of the two men are visible with no captions. Ask students to guess what these men might have done for a living, economic status, etc. Share with them that these men are from the South. This may get students to think they owned slaves. Finally share with students that these men are in fact Cherokee Chiefs and very likely, they did own slaves.
This is a good intro to the Buffalo Bill Posters that show the stereotypical Indians. Take the students’ writings to see how their ideas of typical “Indians” compare to the Buffalo Bill Posters.
Then show the picture of the woman who is also an Indian. Again, this is a good introduction to how Native People’s adapted. In the case of the Cherokee, they actually fully adapted to White culture and society. They owned businesses, plantations and slaves. When gold was discovered and the Cherokee where going to be removed (under Jackson), they in fact went to the Supreme Court and sued for their rights. What a contrast to what is usually considered typical Native American behavior!
Then show other pictures and drawings of Native Americans to show the diversity among tribes of North America and Central America.

Finally, have students create a (5th Grade) Venn diagram of how all of the pictures they have seen are either different from what they originally thought of as “Indian” or the same or have students write a comparison essay (8th grade). Scoring is dependent on what students had in their original “What I Know About Indians” K-W-L or Quick write and how many other pictures were shared.

Indians in American History by Frederick E. Hoxie and Peter Iverson- has a great chapter on Indians in Southern History where ways in which the Cherokee adapted to White culture is discussed in excellent detail.

This would be dependent upon whether you are focusing on Native tribes (housing, religion, etc) in the 5th grade or if you are looking more at Indian removal where the vocabulary is more government oriented. Social Studies book would be a good guide.
Prepared by Rebecca McKinnell, Crestline Excempted Village Schols, Crestline, Ohio