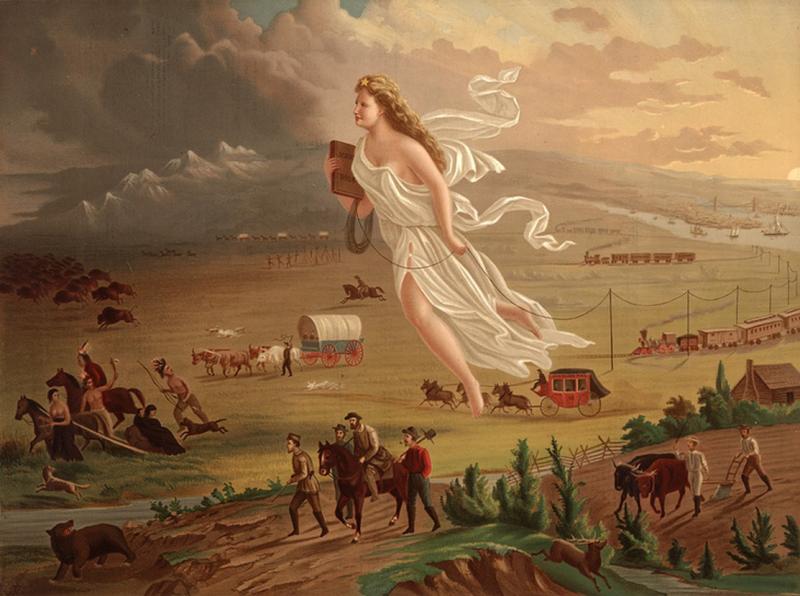 As early as 1751 Benjamin Franklin described a destiny for Americans to fill up new lands to the west, and Jefferson, Monroe, and Adams all expressed expansionist dreams. In the 1840s, however, under Presidents Tyler and Polk, the territory of the United States increased by nearly eight hundred million acres through the annexation of Texas, the acquisition of Oregon south of the forty-ninth parallel, the military conquest of California and New Mexico, and the assumption of Native American lands in the Great Lakes region as those tribes were forced to resettle on the Great Plains. Not only was the expansion of the 1840s dramatic in its extent, it was also quite aggressive and nationalistic in tone. Americans justified the expansion with the ideology of “Manifest Destiny,” invoking divine providence, national superiority, and exceptionalism. This lesson looks ways that the ideology of Manifest Destiny expressed both national political objectives and the goals of ordinary men and women who settled the west.

1. To explain the economic, political, racial, and religious roots of Manifest Destiny and analyze how the concept influenced the nation’s westward expansion.
2. To understand the motivations and expectations of Americans who settled in the West.

Students should begin with journalist John O’Sullivan’s 1839 and 1845 articles in the Democratic Review in which he wrote about an American destiny and first used the phrase “manifest destiny.” Ask them to list the economic cultural, political, and religious assumptions implicit in O’Sullivan’s formulation of Manifest Destiny. What do the two articles reveal about American attitudes toward other nations? Toward themselves?
A collection of resolutions, declarations, and treaties dealing with Texas independence, the acquisition of Oregon and Texas, and the Mexican-American War provides another way to approach the ideology of Manifest Destiny. What do these political and diplomatic documents reveal about American intentions, justifications, and assumptions? Students could then juxtapose two 1859 documents by Juan Cortina, a Mexican living in Texas. How were Anglo-Texan cultural and racial attitudes perceived by non-Anglos?
The John Gast’s painting “American Progress" and George Crofutt’s copy used to market the print may be reproduced. Students should make a detailed analysis of the picture in terms of Manifest Destiny. What transformations—economic, political, technological, environmental—does the movement from east to west represent? Is there a linear progression implied here? Does the appearance of the trapper figures in the center bottom, in advance of the farmers with their oxen and plow, help us understand why the Hudson’s Bay Company was mentioned in the Oregon Treaty, or why that conflict was settled peaceably?

Did the ideology of Manifest Destiny that trumpeted and championed national expansion also shape the lives of ordinary Americans who traveled and settled the West? A multitude of settlers’ journals, letters, diaries, and published narratives has survived. These may be used in a variety of ways, either singly or grouped. Two celebrated contemporary published narratives, Josiah Gregg’s 1842 Commerce of the Prairies and Thomas James’s 1846 Three Years among the Indians and Mexicans reward close reading, but they are both lengthy. The Prairie Traveler: A Hand-Book for Overland Expeditions, Capt. Randolph B. Marcy’s 1859 guide for prospective settlers, laid out the conditions of overland travel on the western frontier, listed the provisions needed for the journey, and gave advice on dealing with Indians and wild animals. Similar lists of necessary provisions were published for the use of early English settlers in North America in the seventeenth century; students might be asked to find analogous lists. In order that students appreciate the enormity of undertaking the westward journey—and the usefulness of Capt. Marcy’s handbook, students could be directed to nineteenth-century maps. An 1802 map of North America, with its western region empty, should be contrasted to Lewis and Clark’s map published after their expedition. Finally, ask the students to compare these earlier maps with the geographical detail present in an 1867 railroad map.
Another set of sources-Narcissa Whitman's letters and journals; Catherine Sager Pringle's Across the Plains in 1844; and “Cayuse Request for a Material Witness”—deals with travel to the Oregon Country in the 1830s and 1840s. Whitman consciously kept a journal of her journey from Pittsburgh aboard a steamboat and subsequent land travel. It charts her changing expectations and experience of frontier conditions, missionary activities, and Indian hostilities. Catherine Pringle and her siblings, traveling from Missouri to Oregon, lost their parents when Native Americans killed them, following a measles outbreak among the Indians, who attributed the epidemic to poisoning by Dr. Whitman.
Students could read other diaries and letters collected by the Library of Western Fur Trade Historical Source Documents. William Becknell’s “Selected Letters,” for example, offers a version of events also discussed by Josiah Gregg, who embellished his account with descriptions of the travelers drinking the blood of mules and dogs and the water of a buffalo’s stomach to satisfy their thirst. Henry H. Spalding’s 1836 “Letter from the Rocky Mountains” offers another view of missionary work among the Indians. Finally, George Catlin’s 1844 Letters and Notes on the Manners, Customs, and Conditions of North American Indians offers a romantic, idealized vision of Native Americans. Students might compare and contrast Catlin’s favorable attitudes with the those of Americans who lost family members and possessions to hostile Indians. Students doing this exercise should also examine Catlin’s paintings of Native Americans for evidence of both the disappearing lifestyles of Native American peoples and of his sentiments toward the Native Americans themselves.