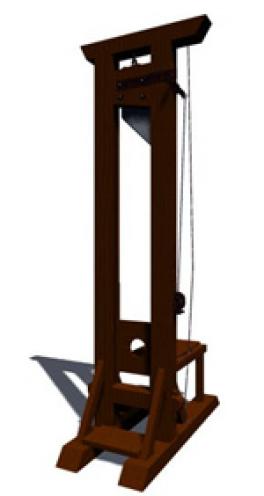 The French Revolution challenged political, social and cultural norms in European society.  Politically, the governmental structure of the Revolution moved from an absolute monarchy to a constitutional monarchy to a republic and finally to an oligarchy.  At each stage, the question of who should hold political power was further refined.  The Revolution also undercut the traditional social hierarchy of France, by reducing the privileges of the First (clergy) and Second (nobility) Estates.  The Revolution had a dramatic cultural impact in terms of building nationalism.
Supplemental Videos:
The Execution of Louis XVI
Storming the Bastille (July 14, 1789)

1.  To ensure that students understand the basic political events of the French Revolution, broken down into four stages, and the shifts of power during each stage.
2.  To examine how the members of the Third Estate gained not only political but also economic and social power while the First and Second Estates lost power.
3.  To understand the French Revolution from a cultural perspective, particularly the building of French nationalism, through the adoption of a national hymn (La Marseilles) and a national flag whose symbols were not solely that of the monarch.

Have half of the students create a timeline of major political events, separating the events into one of four stages:
First Stage: (1789-1791)
Second Stage: (1791-1792): Constitutional Monarchy
Third Stage: (1792-1794): Reign of Terror
Fourth Stage: (1794-1799): Directory
The other half of the students should be assigned key figures of the French Revolution.  Have them prepare short biographies of each figure and then share them with the class.  Suggested list of key figures: Abbe Emmanuel Sieyes, Louis XVI, Marie Antoinette, Jacques Necker, Olympe de Gouges, Jean-Paul Marat, Georges-Jacques Danton, Maximilien Robbespierre, Francois-Noel Babeuf, Napoleon Bonaparte.
The following web sites are recommended for general information:
http://chnm.gmu.edu/revolution/
https://www.britannica.com/event/French-Revolution
To prepare for the mock National Assembly session, assign each student one of the following roles: Clergy member, supportive of liberal political reforms, Clergy member, unsupportive of liberal political reforms, Member of middle-class, supportive of radical political reform, Member of middle-class, supportive of liberal political reform, member of nobility, strongly against liberal political reform, peasant, member of the urban poor, influencing the Assembly by actions outside.  Have the students read the documents suggested below to familiarize themselves with the ideas of their assigned role.

The point of this section is to have students read the major documents and speeches that influenced political events and shifts in the types of government which occurred.   These should be woven into the timeline constructed by the students.  It is important to stress to students that the allegiances and goals of certain groups of people shifted over the course of the revolution, particularly those of the peasantry.
How to do it:
a.  Divide students into several groups, assigning one document to each group.  Have the members of the group analyze the document and compile an overview.  The overview should state the primary argument of the document and explain the line of reasoning and/or evidence presented.  In addition, ask each group to place the document in its proper historical context.
b.  Then have a spokesperson from each group report back to the group at large.
c.  As a whole, trace the commonalities and differences among the documents, in chronological order to underlie the shifts in political power through the four stages of the Revolution.
Questions to be answered:
1.  What rights did the Abbe Sieyes claim in his speech to the Estates General?  Why did he call for a radical restructuring of French society?  Are his views more reflective of the concerns of the First Estate or the Third Estate?  How can this be explained?
Text of speech: http://sourcebooks.fordham.edu/halsall/mod/sieyes.html
2.  What were the links between the Declaration of the Rights of Man and the Declaration of the Rights of Women?  How were these documents influenced by Enlightenment thinking?  What rights do they state that citizens should have?  Who does each document define as citizens?
Text of Declaration of the Rights of Man and Citizen: http://www.hrcr.org/docs/frenchdec.html
Text of Declaration of the Rights of Woman and Citizen:
http://sourcebooks.fordham.edu/halsall/mod/1791degouge1.html
3.  How did Robbespierre think that the republic should be structured and why?  How did he justify the use of force and terror in order to achieve his goals?  How are his ideas tied to Rousseau's concept of the general will?
http://sourcebooks.fordham.edu/halsall/mod/1794robespierre.html
http://sourcebooks.fordham.edu/halsall/mod/robespierre-terror.html

The point of this section is to have students place themselves in the shoes of different social groups of people to demonstrate how the French Revolution affected them.
How to do it:
a.  Have students read the documents pertinent to their "character" designation prior to the class session.
b.  Stage a mock meeting of the National Assembly during the Reign of Terror.  Have the students who represent members of the Third Estate with radical points of view (i.e. Jacobin), begin the assembly by laying out their political and economic agenda.  Then have the other groups react to the ideas of the Jacobins.  (Should remind students that if nobles, clergy and peasants in opposition valued their lives, would not have participated in such a discussion, but for classroom purposes, it is the exchange which is the most important.)
c.  Summarize the major points made by each group and hand out in the next class, for use in studying for the exam.
Questions to be answered:
1.  What was life like for peasants during the French Revolution?  How were peasants involved in revolts against the radical regime of the Jacobins?  Why did they react so strongly against the ideas of the Jacobins?
Texts of contemporary observations:
http://history.hanover.edu/texts/young.html
Websites dealing with the most widespread peasant uprising, in Vendee:
http://chnm.gmu.edu/revolution/d/426
Wiki - Vendee Revolt
2.  How did the Revolution change attitudes toward the monarchy and aristocracy in general?
http://sourcebooks.fordham.edu/halsall/mod/1793burke.html
3.  How did the clergy react to challenges to their own privileged position in society?  What did the Civil Constitution of the Clergy take away from the First Estate and why?
http://history.hanover.edu/texts/cahiers1.html
http://history.hanover.edu/texts/civilcon.html
At the following link is a map which illustrates the percentages of clergy who complied with the Civil Constitution of the Clergy and took the oath of loyalty to the government.
Map Link
4.  What types of grievances did delegates of the Third Estate bring to the meeting of the Estates General in the spring of 1789?  What were their primary demands and why?
http://history.hanover.edu/texts/cahiers1.html
5.  What changes did the sans-culottes advocate and why?
https://alphahistory.com/frenchrevolution/sans-culottes/

Point of this section is: to explore how and why many people in France began to identify strongly with the nation, in addition to their local region, during the French Revolution.  In addition, students should be able to link the political implications of the shift from life as subjects to life as citizens with this cultural shift.
Questions to be answered:
1.  Why do symbols such as anthems and flags act as a unifying force?
2.  Why did nationalism begin to develop in Europe during the late eighteenth and early nineteenth century?
How to do it:
a.  Start discussion by having students brainstorm about when, where and why they hear the U.S. national anthem.  Have them read over the words, listen to the music and discuss the historical background of the anthem.  Then have them discuss the symbolic meaning to the words.
Oh, say can you see, by the dawn's early light,
What so proudly we hailed at the twilight's last gleaming?
Whose broad stripes and bright stars, through the perilous fight,
O'er the ramparts we watched, were so gallantly streaming?
And the rockets' red glare, the bombs bursting in air,
Gave proof through the night that our flag was still there.
O say, does that star-spangled banner yet wave
O'er the land of the free and the home of the brave?
On the shore, dimly seen through the mists of the deep,
Where the foe's haughty host in dread silence reposes,
What is that which the breeze, o'er the towering steep,
As it fitfully blows, now conceals, now discloses?
Now it catches the gleam of the morning's first beam,
In full glory reflected now shines on the stream:
'Tis the star-spangled banner! O long may it wave
O'er the land of the free and the home of the brave.
And where is that band who so vauntingly swore
That the havoc of war and the battle's confusion
A home and a country should leave us no more?
Their blood has wiped out their foul footstep's pollution.
No refuge could save the hireling and slave
From the terror of flight, or the gloom of the grave:
And the star-spangled banner in triumph doth wave
O'er the land of the free and the home of the brave.
Oh! thus be it ever, when freemen shall stand
Between their loved homes and the war's desolation!
Blest with victory and peace, may the heaven-rescued land
Praise the Power that hath made and preserved us a nation.
Then conquer we must, for our cause it is just,
And this be our motto: "In God is our trust."
And the star-spangled banner forever shall wave
O'er the land of the free and the home of the brave!
Listen to the U.S. National Anthem.
b.  Repeat the above exercise with the French national anthem.
Listen to the French National Anthem.
La Marseilles
Arise children of the fatherland
The day of glory has arrived
Against us tyranny's
Bloody standard is raised
Listen to the sound in the fields
The howling of these fearsome soldiers
They are coming into our midst
To cut the throats of your sons and consorts
To arms citizens
Form you battalions
March, march
Let impure blood
Water our furrows
What do they want this horde of slaves
Of traitors and conspiratorial kings?
For whom these vile chains
These long-prepared irons?
Frenchmen, for us, ah! What outrage
What methods must be taken?
It is we they dare plan
To return to the old slavery!
What! These foreign cohorts!
They would make laws in our courts!
What! These mercenary phalanxes
Would cut down our warrior sons
Good Lord! By chained hands
Our brow would yield under the yoke
The vile despots would have themselves be
The masters of destiny
Tremble, tyrants and traitors
The shame of all good men
Tremble! Your parricidal schemes
Will receive their just reward
Against you we are all soldiers
If they fall, our young heros
France will bear new ones
Ready to join the fight against you
Frenchmen, as magnanimous warriors
Bear or hold back your wounds
Spare these sad victims
That they regret taking up arms against us
But not these bloody despots
These accomplices of Bouillé
All these tigers who pitilessly
Ripped out their mothers' wombs
We shall enter into the pit
When our elders will no longer be there
There we shall find their ashes
And the mark of their virtues
We are much less jealous of surviving them
Than of sharing their coffins
We shall have the sublime pride
Of avenging or joining them
Drive on sacred patriotism
Support our avenging arms
Liberty, cherished liberty
Join the struggle with your defenders
Under our flags, let victory
Hurry to your evil tone
So that in death your enemies
See your triumph and our glory!