The Alien and Sedition Acts 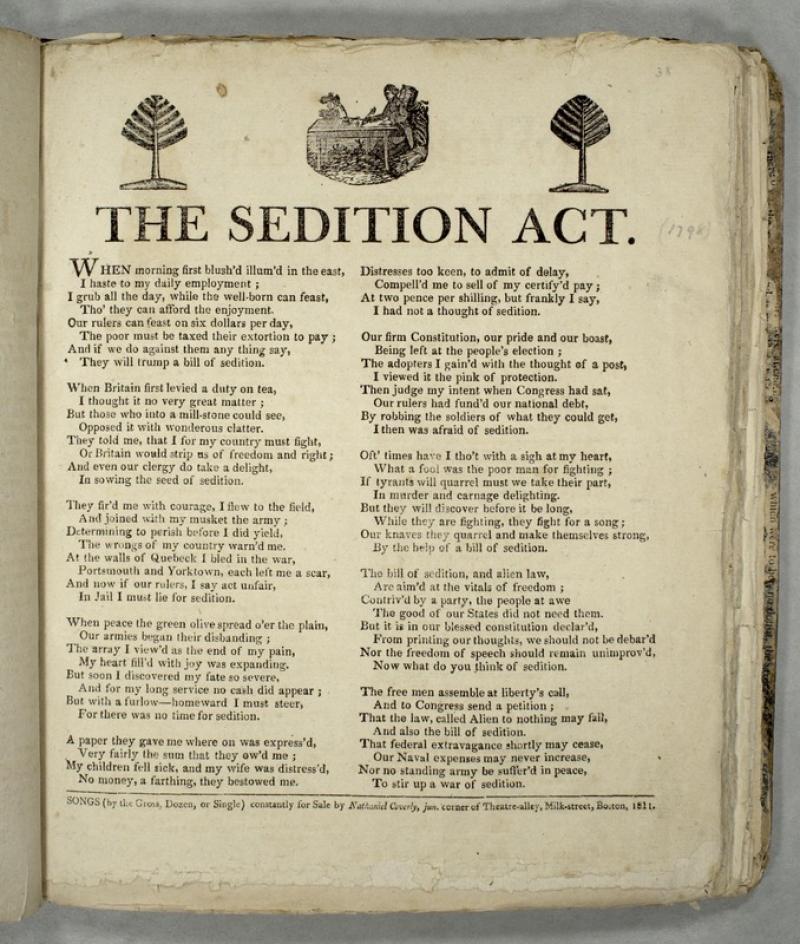 With the rise of political parties in the new nation, partisan conflict intensified over issues of economics, foreign policy, law, and domestic policy. The passage of the Alien and Sedition Acts in 1798 amid fears of war with France exacerbated the growing rift between Federalists and Democratic-Republicans. At the center were fundamental differences over the Constitution: whether its authority was based on broad, implied powers or limited in scope under strict interpretation. The prosecutions under the Alien and Sedition Acts brought these conflicts into the realm of everyday, practical—and increasingly partisan—politics. Democratic-Republicans charged that enforcement of the Sedition Act was intended to suppress the Republican opposition, and freedom of the press became an issue. The debate over the acts also bore the beginnings of the contest over federalism and states’ rights.

1. To understand the provisions of the Alien and Sedition Acts within their political and constitutional contexts.
2. To explore the issues raised by the prosecutions under these acts and the larger constitutional issues they raised.
3. To explore the ways in which the issues raised by the Alien and Sedition Acts were instrumental in antebellum political conflicts, as well as today’s issues.

Understanding the Issues and Context:

In the wake of the attacks on the World Trade Center and the Pentagon, a debate has begun over augmented security and surveillance, versus safeguards for personal freedoms. This debate is certain to occupy our attention for several years. Students should relate these current concerns with the fierce debates that raged in the early national period. What are the parallels with the controversy over the Alien and Sedition Acts? Does understanding what happened in 1798 help us make informed decisions today?
The National History standards expect students to be able to explain why the Alien and Sedition Acts were passed and to appraise their significance. Students should be able to explain the context of events and the constitutional theory that surrounded their passage. How did the Federalist party justify the need for the acts? Why did the Federalists feel the acts did not violate the Bill of rights? Students should be able to assess the arrest and imprisonment of critics of the Adams administration such as Benjamin Franklin Bache, Thomas Cooper, and Matthew Lyon. Were these violations of the First Amendment or were they justified by the crises confronting the new nation?
Several sites provide texts and documents to prepare students for these assignments. The Avalon Project at Yale University contains the texts of the Alien Act, the Sedition Act, and Virginia and Kentucky Resolutions. A useful feature of this site is that is allows a side-by-side comparison of draft and final versions of the resolutions, with changes highlighted. The Virginia Report, the full text of an 1850 publication by J. W. Randolph, has the full texts of the Alien Act and the Sedition Act. It also contains the debates and resolutions of the Virginia and Kentucky legislatures, as well as the counter-resolutions of Delaware, Rhode Island, New York, Massachusetts, Connecticut, New Hampshire, and Vermont. Finally, it contains the Virginia Report of 1799, along with Madison’s report, instructions to Virginia senators, and letters written in the 1830s by Madison on the bank question and the 1798 resolution. The Reference Library of Political Documents contains the text of the Naturalization Act. The Early America website provides both original and modern versions of the acts. Direct your students also to the Library of Congress website with facsimiles of the Annals of Congress so that students can read the contemporary debate over the Alien and Sedition laws, Alien Enemies, Seditious Practices, and Seditious Writers. The Annals are searchable. For an assignment, students might look at the competing viewpoints of Albert Gallatin and Harrison Gray Otis in the Annals, 5th Congress, 2d session, pp. 2107, 2109, 2156-60, 2162, 2145-48.

The Historic Trials website has some limited resources for trials associated with the Alien and Sedition Acts, chiefly images of original versions of the acts in the Columbian Centinel, summaries of the cases brought under the acts, and identifications of major figures involved in the sedition trials.
Teachers will certainly want to consult the National Archives and Records Administration website on the sedition trial of Thomas Cooper. This site follows objectives correlated with National History Standards, provides relevant documents (a newspaper broadside, the warrant for Cooper’s arrest, his indictment and plea, subpoenas, the verdict, and sentence), and outlines some teaching activities. The site also has links to other NARA teaching packets. The full text of United States vs. Thomas Cooper can be found in the section of "The Founders’ Constitution website devoted to the "First Amendment: Speech and the Press" annotates the Constitution in detail and has supporting documents. The site also contains St. George Tucker’s essay on the British concept of seditious libel and its application to American jurisprudence. For a class activity, students might stage the Cooper trial, which by far has the most complete coverage on the web, as a means to understand how contemporaries perceived and framed the issues.

The National History Standards also require students to analyze the impact of the Virginia and Kentucky Resolutions on evolving theories of federalism and states’ rights. They direct students to evaluate the extent to which the issues raised by the Acts became defined in terms of federalism and states’ rights because judicial review had not yet been established? Ask your students how reaction might differed had there been a judicial forum for such issues already in place.
The Virginia and Kentucky Resolutions—and the counter-resolutions later made by the legislatures of Delaware, Rhode Island, Massachusetts, New York, Connecticut, New Hampshire, and Vermont—in part occurred because the principle of judicial review had not been developed at that time. Of these states opposed to Virginia and Kentucky, only Rhode Island framed its response to the Virginia and Kentucky resolutions in terms of judicial review, stating that such power "vests in the federal courts exclusively, and in the Supreme Court of the United States ultimately, the authority of deciding on the constitutionality of any act or law of the Congress of the United States." The Avalon Project and the Virginia Report website allow students to follow the stages of the debates in the Virginia and Kentucky legislatures.
Students might be asked to evaluate Thomas Jefferson’s treatment of the conflict in his First Inaugural Address. To what extent did the election of 1800 heal the wounds opened by the partisan conflicts of the 1790s? As a good practice for the DBQ-style charts and maps, students might examine the Election of 1800; the electoral results for the election, including a map and state voting data, might be usefully compared with the counter-resolutions.
Finally, the National History Standards ask students to what extent the Alien and Sedition Acts were a violation of the Bill of Rights. Was the more important legacy of the Kentucky and Virginia Resolutions that they vouchsafed individual rights or that they broached the issue of states’ rights? Ask them to compare and contrast these acts with the Bill of Rights. Students might want to look at Freedom Papers No. 6, "Public Access to Government Information," which deals with censorship, prior restraint, and seditious libel. For more on the free speech clause, students might visit "Exploring First Amendment Law" and the ACLU Briefing Paper No. 10 on "Freedom of Expression: The First Amendment."
A DBQ sample set on the Alien and Sedition Acts is available. The Electronic Text Center maintained by the University of Virginia contains K. R. Constantine Gutzman’s article, "From Interposition to Nullification: Peripheries and Center in the Thought of James Madison." An argument for enshrining the Virginia and Kentucky Resolutions alongside John C. Calhoun’s constitutional theory in modern interpretations of the Constitution is made by William J. Watkins, Jr., "The Kentucky and Virginia Resolutions: Guideposts of Limited Government."