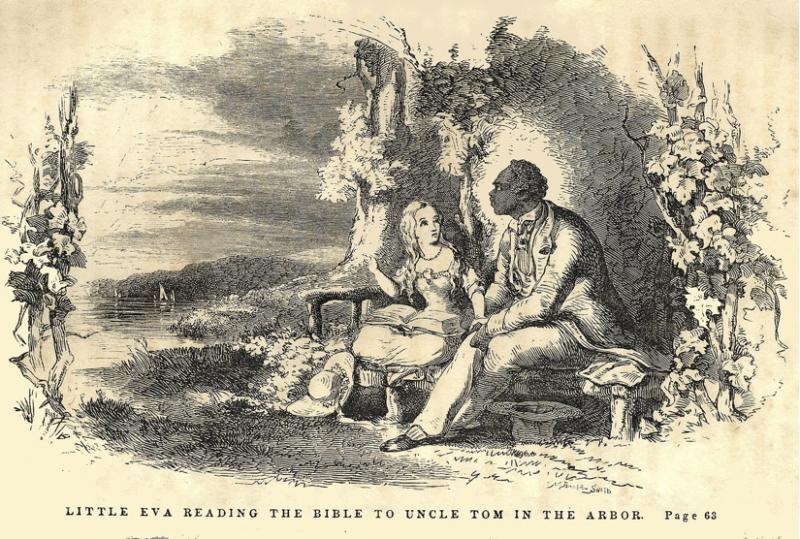 This lesson uses "Uncle Tom’s Cabin & American Culture: A Multimedia Archive" (http://utc.iath.virginia.edu/) to examine the sectional crisis of the 1850s, as well as slavery and the mindset of Southern planters during the Antebellum Era. The lesson draws on the rich array of material available at the "Uncle Tom's Cabin & American Culture" website. In completing the assignment, students are required to analyze not only traditional text documents but also a selection of audio and visual sources.

1.  To provide insight into how racial stereotypes were constructed and reinforced by American popular culture during the Antebellum Era.
2.  To examine how Uncle Tom's Cabin challenged those stereotypes and, in doing so, contributed to the escalating tensions between North and South over the issue of slavery.
Part 1: Minstrel Songs and the Image of Slavery
1.  This lesson uses blackface minstrel songs as an historical source to explore some of the images of slaves that were commonplace in Antebellum America.  When introducing the subject, you should emphasize that minstrel shows were particularly popular in northern towns and cities. A significant part of their appeal for northern audiences was that these troupes claimed to present a genuine picture of slave life in the American South. The authenticity of their portrayals can be judged by the fact that the most famous minstrel composer of the era, Stephen Foster, was born just outside of Pittsburgh and visited the South only once during his lifetime.

Enter the website and select browse mode.Then click on the box titled "Minstrel Shows" and go to the "Gallery of Images." This page features a sampling of illustrations that adorned the covers of minstrel song sheets. These song sheets were published and marketed to the public for use in the home and parlor. Ask your students to examine the first four illustrations. Clicking on each one will bring up an enlarged image in the center of the screen. After spending a few minutes looking at the illustrations, go to the page "Minstrel Songs." Here, by clicking on the song title, you can see the lyrics to each song. If your classroom is properly equipped, you can also listen to a sound recording by selecting one of the icons at the top of the screen on the left-hand side. (Note that the songs are available in three file formats of varying size and sound quality. The larger files require a high-speed modem). Have your students listen to and/or read the lyrics to Zip Coon, Old Color'd Gentleman, and Old Uncle Ned.

After studying the illustrations and listening to the music, ask your students to respond to some or all of the following questions--How are slaves portrayed in both words and image in these songs? What characteristics, physical and intellectual, are emphasized or exaggerated? Why do you think minstrel shows were such a popular form of entertainment in the North?
Part 2: Uncle Tom's Cabin
The second part examines how Uncle Tom's Cabin challenged the stereotypes of slaves popularized by the minstrel shows. Stowe's novel created a sensation in the North and sold several hundred thousand copies within a year of its publication. The book helped catalyze northern opposition to slavery both by dramatizing the plight of the slaves and by putting a human face on their suffering.

In browse mode, click on "Illustrations" in the central box. This brings you to a page with links to illustrations from the different editions of the novel. Select "The Illustrated Edition (1853)." While the first edition contained only seven illustrations, this version of the novel featured over 100 specially-commissioned drawings. Obviously, you will have to be selective in choosing which images you want students to examine. For a representative sampling, consider using "Tom's Writing Lesson" (found in the left-hand column, 4th from the top), "Haley with Slave Children" (left-hand column, 7th from the top), "Eva and Tom Reading the Bible" (left-hand column, 27th from the bottom), and "Tom's Final Beating (left-hand column, 6th from the bottom). When finished with the pictures, return to the main page of the website and click on the box "American Reviews." Have your students read the review that appeared in the March 26, 1852 edition of The Liberator, which was the leading radical abolitionist newspaper of the day.

After studying the illustrations and review from The Liberator, ask your students to respond to some or all of the following questions--How do the illustrations in Stowe's novel compare to those found on the sheet music covers in terms of the scenes portrayed and the way individual slaves are depicted? What does The Liberator reviewer think of the novel? What does he believe are its most important qualities?
Part 3: The Southern Response to Uncle Tom's Cabin
The last part of the lesson focuses on how southerners responded to the publication of Uncle Tom's Cabin. By the early 1850s, southerners were feeling increasingly under siege by abolitionist attacks on slavery. The tremendous popular and critical adulation the novel received in the North only deepened southerners' sense of alienation and intensified their efforts to defend slavery.

In browse mode, click on the box "American Reviews" and have your students read the review from The Southern Press.

After examining the review, ask your students to respond to some or all of the following questions--What is the reviewer's assessment of the novel? What specifically does he object to in Stowe's portrayal of slavery? What criticisms does he level at the "free" society of the North?

Suggestions for Additional Activities:
The Uncle Tom's Cabin website is a digital archive containing an immense amount of primary source material that can be used to expand on this lesson plan in any number of ways. For instance, you can explore how Stowe's novel was received in the free black communities of the northern United States and Canada by selecting "African-American Responses" from the central page. The critical commentary written by George Harris in The Provincial Freeman (click on "Newspaper Commentaries" followed by the name of the paper) offers particularly fertile ground for discussion. Harris objected to the treatment of some of the black characters and condemned Stowe for promoting colonization as a solution to America's racial problems. You can ask the students to consider the question of whether Stowe is guilty of replacing one set of stereotypes with another that was sympathetic yet still palatable to white audiences. This web site also includes excerpts and illustrations from some of the "Anti-Tom" novels that appeared in the wake of Stowe's book (from the main page, go to "Pro-Slavery Responses" and then select "Anti-Tom Novels" from the menu). Students could read a few sample chapters and analyze how the authors of these works attempted to portray slavery as a benign and even humane institution.