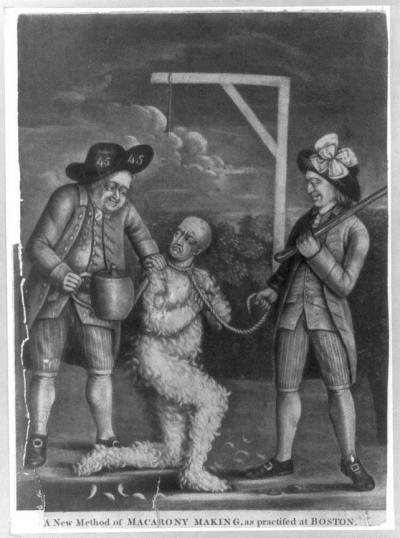 Study Skills and Methods #2:  Use primary and secondary sources to answer  questions.
History #3: Identify and explain the sources of conflict which led to the American Revolution, with emphasis on the perspectives of the Patriots, Loyalists, neutral colonists and the British.

After analyzing the Tarring and Feathering Prints, students will compare and contrast the prints using a Venn diagram.

Instructional Steps to Implement the Lesson:

Students will discuss responses to cruel and unusual punishment prompt.

Note on prints for teachers:

Tarring and Feathering Prints Description:
These two prints show the Revolutionary practice of tarring and feathering royal officials and others whom the Sons of Liberty felt deserved punishment.
The first print shows two men with a tarred and feathered customs officer, they are forcing him to drink from a large teapot. The man has a short piece of rope around his neck which may have been attached to the piece of rope hanging from a gibbet in the background. On January 27, 1774, a British customs officer, John Malcolm, was tarred and feathered, led to a gallows, and forced to drink tea. The American holding the teapot wears a hat with "45" on it, a patriotic symbol referring to the John Wilkes case of 1763. The other American, holds the broken end of the noose and carries a club. The large bow in his hat indicates his membership in the Sons of Liberty.
The second print shows five men forcing a tarred and feathered customs officer to drink from a teapot, a bucket and a liberty cap are on the ground at his feet. They stand beneath the "Liberty Tree" from which a rope with a noose hangs; in the background, shadowy figures on a ship dump tea overboard.