The Molasses Act and the Coming of the American Revolution 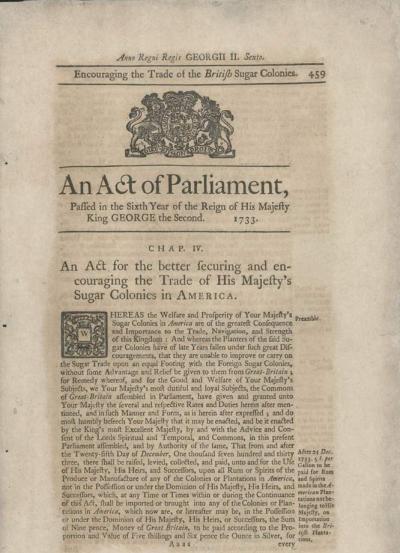 copy of the Molasses Act of 1733  (From the Massachusetts Historical Society).

Students will understand through role playing how the British had control over the New Englanders using certain taxes.  While passed in 1733, the Molasses Act was not vigorously enforced by the English government and was routinely violated by New England shippers. That changed in 1764 when His Majesty’s government under George Grenville passed The Sugar Act, which, among other things, included provisions to enforce the older Molasses Act. These actions were part of an overall change in colonial policy as a result of English victory the French in the French and Indian War (or Great War for the Empire). The British government began to more actively govern the Colonies. The English government also desired the colonies to pay more in taxes in order to pay down the great debt that Britain incurred fighting the war.
New Englanders, however, felt that these taxes were not fair. The resulting tensions would mount over the next several years, leading eventually to a revolt against the British.

1.  Students will take a
File
molasses_act_of_1733_pre_post_test.pdf102.06 KB
over material on the Molasses Act of 1733.
2.  As students finish the pretest they may begin reading the
File
molasses_act.pdf227.27 KB
.
3.  Students will participate in the role play activity.  Each student will be given a role to play and placed in one of the four corners of the room.  Each student will
File
signs_for_corners__participants.pdf10.58 KB
with their role written on it.  Role Activity steps listed:
New England Corner: 1 Rum Maker, 2 Factory Workers that Make the Rum
England Corner: 1 King George
West Indies Corner:  1 Plantation Owner
Africa Corner:  Rum Buyers, Slaves (as many as you wish).
The Ship Captain who moves from corner to corner.
Tax Collector  who follows the captain
Give each student, except for the slaves, 30 pennies.
4.The ship captain begins in the Africa corner.  He loads up his ship with slaves.  The captain takes the slaves to the West Indies and sells them to the plantation owner for 1 cent each.  The captain then loads up his ship with molasses.  (Barrels can be made from poster board to represent the molasses.)  This costs the captain 7 cents.  The tax collector collects 1 cent for King George.  (He does not give this to King George until the simulation is over.)
5. Next the captain takes the molasses to New England where he sells it for nine cents to the Rum Maker.  The tax collector collects 1 cent.  The Rum Maker also gives 1 cent to his factory workers for making the rum.
6. The Rum Maker then sells rum to the ship captain for 12 cents.  The tax collector takes 1 cent.
7. The ship captain takes the rum to Africa and sells it to the Rum Buyers for 14 cents.  The tax collector takes 2 cents.
8. Repeat this two more times.  The tax collector keeps 10% of what he has collected for doing his job, then takes the rest to King George.
9. Last, have the students recount their pennies.
10. The students will watch the timeline video leading up to the American Revolution
11. Have the students read portions of the Molasses Act. Divide the class into 8-10 groups  and assign each group a paragraph or two of the Act. Each group will use a Document Analysis Worksheet to help them analyze their section. Finally, each group will report back what they found, in particular, relating it to the simulation they participated in.