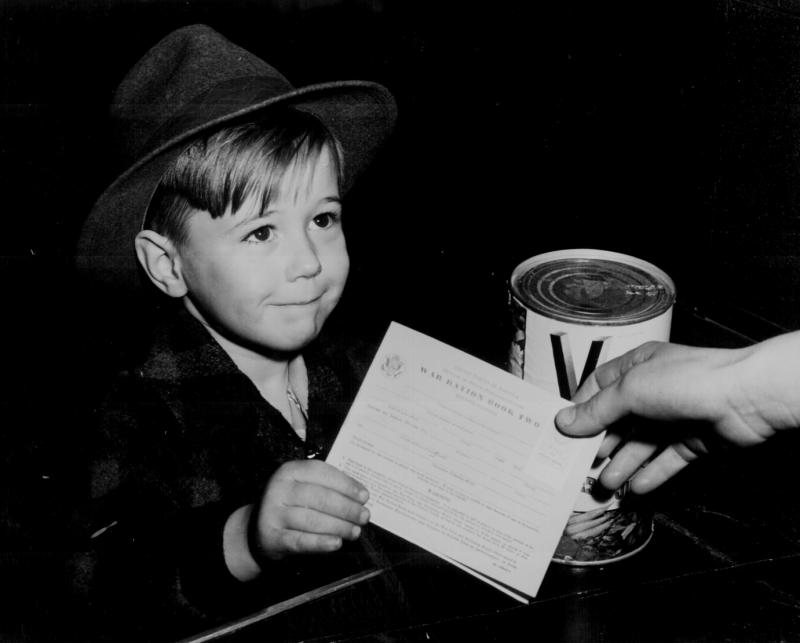 "An eager school boy gets his first experience in using War Ration Book Two. With many parents engaged in war work, children are being taught the facts of point rationing for helping out in family marketing." Alfred Palmer, February 1943. 208-AA-322H-1. National Archives Identifier: 535567

Everyone in the U.S., even children, helped America win WWII.

Language Arts: Reading Applications
Language Arts: Research
Communicate findings orally, visually, and in writing multimedia.
Social Studies: History
This activity will serve as an enrichment activity in social studies since there are objectives pertaining to WWII listed for grades 6-8.

1. Introduce the concept of every person in the class making some contribution to the successful completion of an assignment. Some type of trust-building game is a good way to do this.
2. Describe the political climate on the American homefront in 1941-42. Ask students to find out if a grandparent or great-grandparent fought in WWII. Ask those relatives to share their memories.

1. Assign the reading of the novel, Voices at Whisper Bend by chapters. Make sure to do some read-aloud in class. Time for partner-reading might also be set aside.
2. As students complete the reading use the chapter discussion questions to keep everyone on track and establish comprehension.
3. Group students into teams of 3-4 people. Assign the general theme: Every citizen (even kids) helped the allies win WWII. Tell the students their ideas will be used in the construction of a poster that could be placed in any local business or home window in 1942 to generate support for American’s troops.
4. Students (depending on grade and skill level and at the discretion of the teacher) may research pre-approved internet sites to hunt for primary source materials to be presented as a poster for whole-class viewing.
5. Students might choose from materials provided by the teacher (already printed and ready to cut) to construct their poster.
6. Students may design and draw their own posters to promote the assigned theme.
7. When the posters have been completed, allow the teams to present them to the class. Encourage the students to justify their choices of visual material and slogans.
8. Good on-line sources of primary material:

1. Review the material via a game (Jeopardy adapted to the theme of kids helping on the homefront)

Adaptations for Students with Learning Disabilities:

1. An aide or volunteer could read the assigned novel on tape for students with reading difficulties.
2. Learning disabled student may be given extra time to work or fewer discussion questions.

1. Read a non-fiction book about children who lived during WWII and do a book-react.
2. Suggestion: Hitler Youth: Growing up in Hitler’s Shadow by Susan Bartoletti