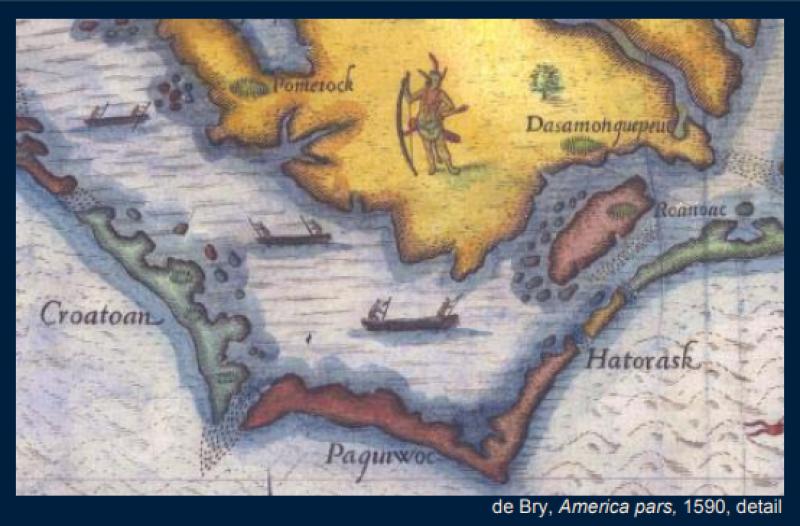 Students play the role of crime scene detectives in finding out more about the mystery.
They are provided with “John White’s account of the Return to Roanoke”.
After some preliminary discussion about the history of Roanoke and his account, students then investigate theories as to the fate of the “Lost Colony”.
They are to use at least two additional pieces of evidence, one of which must be a primary source.
They are to consider social, economic, cultural, political, and religious factors that effected the colonist’s actions.
Students are to present their evidence to the jury (class) who will decide the validity if their argument.

Excerpts from John White, The Fifth Voyage of M. John White into . . . Parts of America called Virginia in the Year 1590   (from the website of the National Humanities Center) (
File
lost-colony.pdf468.32 KB
)

Cold Case # 1587
In 1587, young “Virginia” had much to be “settled”, but three years later all appeared to be “Lost”. Solve the dual mystery of young “Virginia” if you “Dare”, but for grandfather’s sake don’t “White”-wash the results. Despite the efforts of “Little John”, Paradise Lost was not Paradise Found. Your challenge, should you decide to accept it, is to find that which they could not and if you choose to go above and beyond “what of ‘Virginia’s’ sisters, Caroline (1564) and Christina (1638)”?
1.    Interrogate the sources.
2.    Explain and evaluate alternative theories from at least three secondary sources (the work of other historians).
3.    Hunt for additional evidence.
4.    Construct a theory based on the facts.
5.    Defend your theory using evidence.