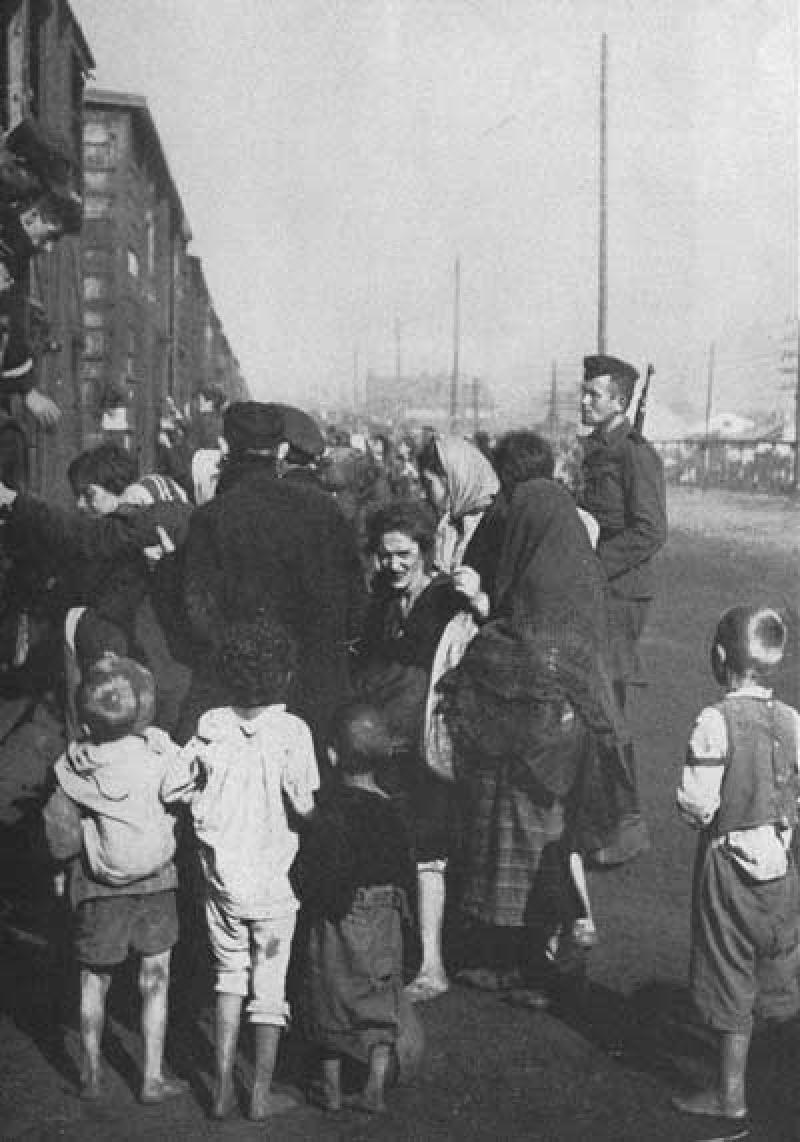 The enormous number of Jews killed during the Holocaust, estimated at 6,000,000, often makes it difficult for students to understand the persecution and suffering on an individual level. The purpose of this lesson plan is to place a human face on the Holocaust, by focusing on survivor's testimony, letters and journals from survivors and those who were killed, and poetry. The intention is to help students see the Holocaust as an event which affected individuals and families in addition to its larger societal ramifications.
The following links contain graphic images and depictions of the atrocities that occurred during the Holocaust; you will have to use the material with discretion. The most productive and meaningful discussions of the Holocaust will force the students to grapple with the tragedy on a personal, as opposed to statistical, level. These links expose students to the experiences of concentration camp, death camp, and ghetto residents as well as to the experiences of several camp guards and executioners. The students should recognize that humans were on both sides of the barbed wire fences and furnace doors.

1.  To widen student's understanding of the Holocaust by focusing on two different, yet related, experiences of Jews in Europe during the Holocaust, that of death camps and life in major ghettoes such as the Lodz Ghetto in Poland.
2.  To help students trace both commonalities and differences between these types of experience.
3.  To ensure that students see the Holocaust from individual viewpoints.

1. Assign students to one of the following groups: death camp experience (can be split into single camps: Auschwitz, Belzec, Chelmno, Majdanek, Sobibor, Treblinka) or life in a ghetto (the two largest in Poland were Lodz and Warsaw).  Have students read some of the testimonies listed below and write informal reactions to what they read.
2. If possible, contact local Jewish organizations to inquire if a Holocaust survivor would be willing to come and speak to the class.

Instructions:
a. Have students read some of the survivor's testimony through the following on-line sources.
A few alternative collections of testimonies are:
b. Have students summarize information about what life was like in the death camps described in the testimony which they read. Links and pictures/drawings of several of the death camps are listed below.
Auschwitz
Auschwitz, general information
Auschwitz
Auschwitz at History.com
The Trial of Adolf Eichmann - Trial Participants Then & Now
Auschwitz, pictures
Chelmno
Chelmno, general info
Sobibor
Sobibor, general info
Treblinka
Treblinka, general info
Treblinka, pictures

2. Life in Ghettoes: Focusing on Lodz Ghetto in Poland

Instructions:
a. Provide student's with an overview of why the ghetto system was important to the Third Reich's policies of racial colonization, Lebensraum (living space), and consolidation of the Jewish population.
b. Have student's look through some of the following web sites to gain a deeper understanding of what life in the ghetto system was like.  Ask students to compare life in a ghetto with that of a concentration camp.  What are the similarities?  What are the differences?
The Perpetrator Experience
Several of your students will have heard of Holocaust deniers, even if they have not heard or read Holocaust denials themselves.  One way to counter this movement is to address it explicitly and to have the students read accounts from the guards and bureaucrats who actually executed the plans and the victims.
You might want to have the students first read this 1962 poem by Leonard Cohen, entitled "All There is to Know About Adolph Eichmann."
Eyes: Medium
Hair: Medium
Weight: Medium
Height: Medium
Distinguishing Features: None
Number of Fingers: Ten
Number of Toes: Ten
Intelligence: Medium
What did you expect?
Talons?
Oversize Incisors?
Green Saliva?
Madness?
Following this, you could have the students read the testimony and/or recollections of several of the concentration and death camp guards and other personnel.
Treblinka, First-hand testimony: 'I looked for him but God must have been on holiday': Last living survivors of Treblinka death camp speak of unimaginable horrors.
Testimony from the SS leaders of one of the Einsatzgruppen (D) -- it wanders a bit trying to establish the chain of command, but it could be useful.