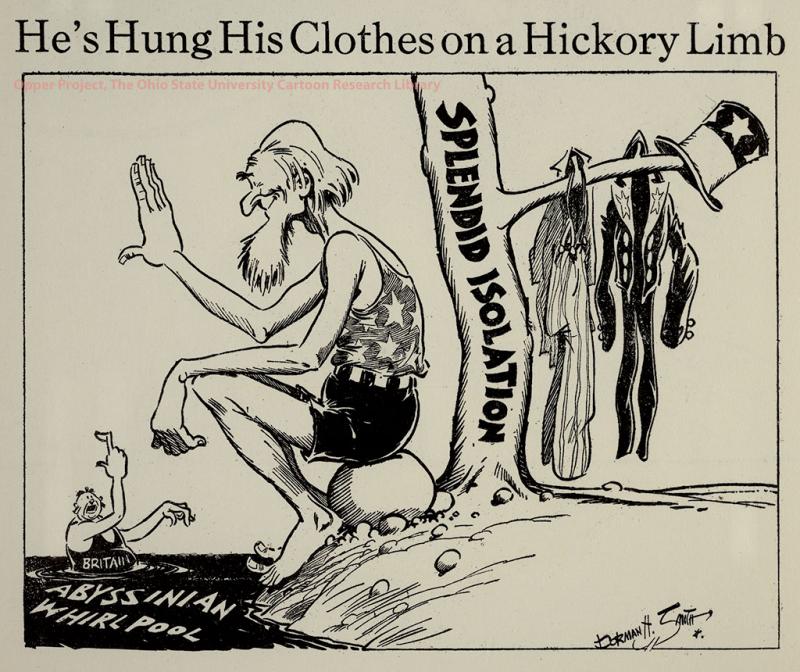 World War II began on September 1, 1939. However, in the years before that conflict began, the major Axis powers were involved in acts of aggression. Thus, in 1937 Japan invaded China. In 1936, Germany and Italy supported the side of dictator Francisco Franco in the Spanish Civil War. And in 1935, Italy invaded Ethiopia, the subject of this cartoon. The East-African kingdom of Ethiopia, or Abyssinia as it was also called, was one of the few independent nations in European-dominated Africa. Under the leadership of Emperor Haile Selassie, Ethiopia’s economy grew. Italy, meanwhile, controlled most of the surrounding territory. Italian dictator Benito Mussolini desired to annex Ethiopia to Italy’s African colonies and feared that independent Ethiopia would grow too powerful. Therefore, Mussolini used a minor border incident to justify an invasion of Ethiopia on October 3, 1935. Great Britain also had colonies in East Africa, and the British government took the lead in opposing Italy’s aggression. The British urged the member countries of the League of Nations to take action, and also appealed to the major power that was not a member of the League: the United States. These efforts proved large ineffective. 1936, Selassie was forced into exile and Ethiopia was integrated into the colony of Italian East Africa until 1941. The title here refers to an old saying about swimming, “Hang your clothes on a hickory limb, but don't go near the water.”