Eyewitness to History: History through the eyes that lived it 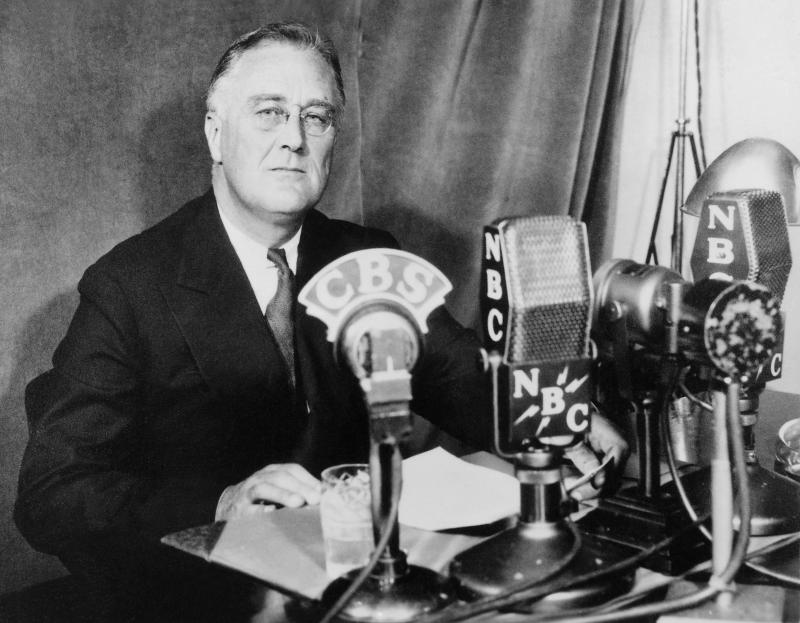 World War II – several topics are covered in this lesson relating to the war including D-day, Hiroshima, FDR, FDR’s death, rationing, Pearl Harbor, etc. Teachers could elect to use this lesson as an overall introduction to a unit on World War II, or they could narrow in on any one of those topics.

Several content standards are addressed in this lesson, including standards for Language Arts and technology. However, some specific standards from the Ohio Social Studies Content Standards that are addressed include:
1. Analyze the impact of U.S. participation in World War II with emphasis on:
a. Events on the home front to support the war effort, including industrial mobilization, women and minorities in the workforce;
b. The internment of Japanese-Americans.
2. Analyze the causes of World War II including:
a. Appeasement;
b. Axis expansion;
c. The role of the Allies.
3. Analyze the consequences of World War II including:
a. Atomic weapons;
b. Civilian and military losses;
c. The Holocaust and its impact;
d. Refugees and poverty;
e. The United Nations;
f. The establishment of the state of Israel.

The investigation of the sound files and website should take 1 class period (45-50 minutes); if teachers have students present their findings, another 1-2 class periods may be needed.

The goal of this lesson is to introduce students to the voices that would be heard during World War II. As radio was one of the primary forms of entertainment and news, most Americans during the war either owned a radio or gathered around a neighborhood radio in order to listen to the latest updates regarding the war. This lesson provides the opportunity for students to hear radio broadcasts from the time period, to analyze that broadcast, and to investigate additional information on that topic addressed during the radio broadcast.

Students will utilize technology to investigate various areas of World War II including D-day, Hiroshima, FDR, FDR’s death, rationing, Pearl Harbor, etc. Upon completion of this lesson, students should be able to discuss in depth on a topic relating to World War II, using a sound recording to verify their claims.

1. Internet access – alternate: if a class set of devices is not available, have students work in groups of 2 or 3.
2. “Eyewitness to History: History through the eyes that lived it” worksheet – enough copies for a class set
3. Poster board
4. Markers, crayons, colored pencils

Begin the lesson by having students compile a list of ways in which they receive their news (internet, daily news programs, newspapers, magazines, etc.). Have students write about a news item that traveling across all of those media in the list. Discuss with students the importance of the radio as both an entertainment device as well as the primary means by which Americans received word on national and world news items. Continue the warm-up by playing part of a sound recording of FDR’s “A Day Which Will Live in Infamy” speech. Review the background of this speech and discuss the impact that this speech had on Americans who heard this broadcast. Explain that students will be listening to other broadcasts from the time period to learn about other events related to World War II. Once again, the sound recording and the transcript of FDR’s “A Day Which Will Live in Infamy” speech can be found on the archives.gov web site here.

1. Prior to class, cut out strips of paper with the following labels (make enough for an entire class set or enough for pairs of students),
a. Great Britain declares war on Germany, 1939
b. Gas Rationing, 1942
c. D-day, 1944
d. Franklin Roosevelt, 1944
e. Tokyo Rose, 1944
f. Iwo Jima, 1945
g. Death of FDR, 1945
h. Lord Haw Haw, 1945
i. Germany surrenders, 1945
j. Hiroshima, 1945
2. Conduct the warm-up activity with students.
3. After the warm-up, inform students that they will be investigating some of the radio broadcasts that were issued during the years of the war. Have students randomly select one of the strips of paper to choose their broadcast.
4. Distribute the worksheet, “Eyewitness to History: History through the eyes that lived it” to each student.
5. Read the introduction on the worksheet aloud with students to familiarize them with the assignment. Have students log onto a computer and direct them to the webpage.
6. Allow time for students to complete the worksheet that analyzes the radio broadcast.
7. When students complete the analysis, have students create a poster that details their event and how it impacted the listener of the broadcast. Requirements should include the incorporation of the vocabulary words, the inclusion of the quote from the sound recording, a minimum of 5 facts relating to their events, a title, color, and neatness.

The posters will likely need additional time. If class time is not available, students should be instructed to complete it at home.

Students should present their posters to their classmates in a large group setting to teach their area of World War II to their peers. Teachers should have a listening guide prepared to allow students who are observing the presentations to take notes and follow along with their classmates’ presentations.

Assessment Based On Objectives:

Assessment should be based upon the posters submitted by students.

Adaptations (For Students With Learning Disabilities):

Gifted students should be directed to investigate one of the questions they developed for question #14 on the “Eyewitness to History: History through the eyes that lived it” worksheet in greater detail. They could prepare a report on that question to satisfy their curiosity. Additionally, as an extension, a lesson for FDR’s “A Day Which Will Live in Infamy” speech can be found at here.
The following teaching suggestion from the above website is provided below:
“For Further Investigation…”
6. Ask students to compare and contrast Roosevelt's "Day of Infamy" address with Patrick Henry's "Liberty or Death" speech before the Virginia Convention. They should include the following suggestions:
• Describe the setting of each speech.
• Find examples in Henry's speech of allusion, hyperbole, onomatopoeia, rhetorical questioning, metaphor, repetition, and alliteration.
• Examine Roosevelt's speech for examples of these literary devices.
• Recognizing that both speeches are outstanding examples of war addresses, consider how they are different and how they are similar.
• Decide why each of these speeches was effective.
• Decide which speech you believe is most effective and explain why.
7. Ask students to interview a person who heard President Roosevelt deliver the "Day of Infamy" address and to write an article about the experience. Students should ask the following questions of the interviewee for their articles:
a. How old were you and where were you at the time of the address?
b. What do you recall about your feelings toward U.S. involvement in the war before Pearl Harbor?
c. What were you doing when news of Pearl Harbor broke?
d. What was your reaction to the news of Pearl Harbor, and what, if anything, did you do upon hearing the news?
e. How did President Roosevelt sound making the speech?
f. What were your reactions to the speech in feelings and deeds?
The source of the above teaching suggestion is from:
http://www.archives.gov/education/lessons/day-of-infamy/activities.html

Possible Connections to Other Subjects: