Progressive Democracy - Prospect of a Smash Up 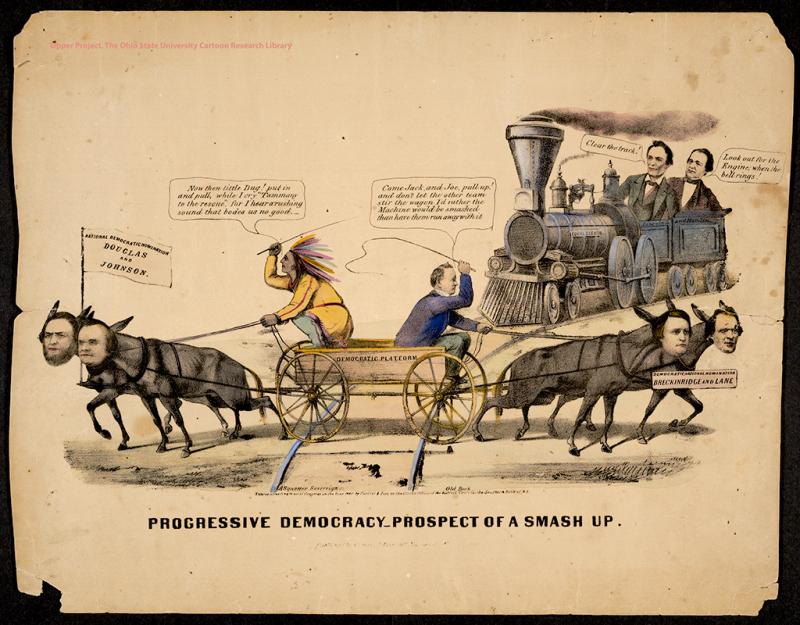 This well known Currier & Ives lithograph from the election of 1860 shows a divided Democratic Party straining against each other to control the party platform. Stephen Douglas and Hershel Johnson attempt to pull the platform away from Southern Democrats John Breckinridge and Joseph Lane. The Democratic Convention in 1860 exposed deep divisions within the party over slavery, with Douglas favoring a compromise approach, while Breckinridge was unswervingly pro-slavery and in favor of the expansion of slavery into the new territories out West. On the Douglas side, a Native American person ("Squatter Sovereign") drives the wagon, representing Douglas's involvement in Western territories as the author of the Kansas-Nebraska Act which allowed for popular sovereignty. The Native American references Tammany Hall, which was the "machine" that dominated Democratic Party politics in New York City and which many believed to be the pinnacle of political corruption. James "Old Buck" Buchanan drives the Southern Democratic wagon. Buchanan was president from 1856 to 1860, and favored the expansion of slavery and sympathized with slave-owners, making him bitter rivals with Douglas. Abraham Lincoln and Hannibal Hamlin, the Republican nominees in 1860, approach this division in an engine of "Equal Rights" suggesting their supposedly egalitarian view on slavery.