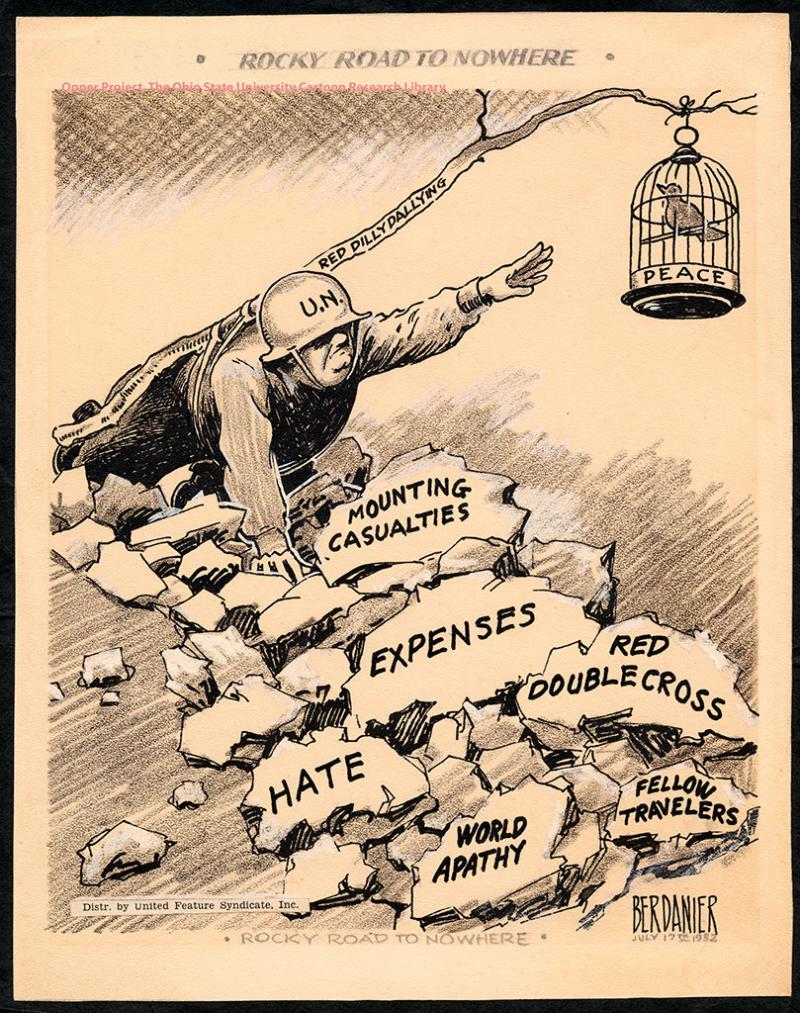 The Korean Conflict, so-called because it never entailed an official declaration of war by the United States government, began in 1950 when North Korea invaded South Korea. tThe Soviet Union and the United States divided Korea following World War II, and established governments favorable to their own particular economic, political, and diplomatic interests: the Soviet related Democratic People’s Republic of Korea in the north, and the U.S. allied Republic of Korea in the south. The war was one illustration of the mounting tensions between Soviets and Americans during the Cold War. The Truman Doctrine, developed by Harry Truman and his foreign policy advisors following World War II, dedicated the United States military to preventing the spread of communism throughout the world. When North Korea invaded South Korea with the clear agenda of uniting the peninsula under a singular communist government, the United States reacted by sending troops as part of a United Nations coalition to push North Korea back to the 38th parallel (a line of latitudei line marking the border between North and South Korea). The coalition forces suffered many early defeats that resulted in their retreat to the southernmost corner of the Korean peninsula. However, the coalition troops soon rallied with the help of American Air Force attacks on strategic North Korean locations. Soon, the North Korean army had been pushed back to the 38th parallel. The conditions of the UN resolution having been met, fighting should have ceased and peace negotiations initiated. However, coalition forces were lured by the prospect of eliminating a communist nation from the map, and therefore they continued to force the North Korean army back, nearing the border with China, another communist nation. At this point, China decided to join the war on the side of the North Koreans, and their entrance created a formidable opponent to the US-led coalition army. This occurred only a few months into the conflict, but the stalemate that ensued lasted for nearly three years. This cartoon depicts many of the criticisms made by observers of the war. The rocks illustrate the pitfalls of engaging in the conflict: casualties were estimated in the hundreds of thousands, the war required vast expenditures during the stalemate, many accused the Soviets of double-crossing the US and supporting the North Koreans, the war generated a significant amount of racial hate and animosity, the rest of the world appeared uninterested in supporting either side of the conflict, and many people in the United States and elsewhere actually supported socialism and were at times sympathetic to the North Koreans, their “fellow travelers” in the communist world.